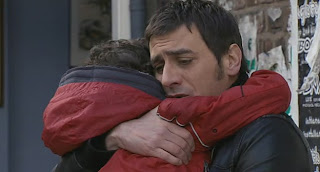 A new feature for this blog. I also write for The Coronation Street Blog, which is a UK timeline blog and i do these awards after watching the episodes each week. This post originally appeared in March 2010 and covers the episodes seen in Canada last week. Hope you like it.

Soap cliche of the week: If she faints, she's pregnant and if she's had sex with two people, one of whom she shouldn't have, she's pregnant and doesn't know who the father is. It's Classic Soap Opera Plot 328. which leads us to...
Best (Worst) Reaction Ever: Kevin setting the scan photo up in flames!

Could she/he be any more theatrical? BLACK star: Gail coming down the stairs, wild eyed, with a high operatic aria in the background. Sheesh!

You'd think she'd be used to it award: Gold Star: Gail burying her third husband. Mind you, he was the only husband she loved when he died.

No chance of getting in her pants award: Silk star: Nick: Once Carla found out he got inside info from Kelly, he didn't have a prayer.

Deja Vu award: Gold Star: Kelly telling Nick that one of these days someone will stab him in the back. She meant it figuratively. Does she realize that's how his father died? Literally!

The Deirdre "I didn't do it" Rashid banner is handed over to Gail Platt! 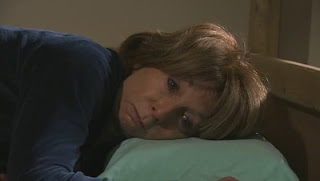 Rita "Helloooo Street!!!" (And it's great to have her back!)
Tina about Gail: "She's been lying about how my dad died and I don't want to look at either one of her two faces while I'm burying him."
Nick "Some of us can't afford to fall apart, David" (but you could show a bit more concern or worry for your mummy)
Kelly to Nick "One of these days someone is going to stab you in the back" (she didn't mean it literally but you do remember that's how his father died!)
Norris about the warring funeral "teams".."Bit odd, don't you think?" Dev: "Decorum, Norris. Decorum" (Too bad Tina couldn't restrain herself at the funeral)
Peter: "Oh my baby!" (ok, did anyone else have tears running down their face at that line?)
George: "I am deeply sorry for all the trouble I caused." (And so you should be!)
Eileen about Gail: "She'd have trouble cooking a fish with the head still on."
Rita: "I don't think I give Norris' staying power much thought."
Kevin to Tyrone: "Congratulations!" Tyrone: "Cheers, mate, who's the daddeeee!!!" (um, yeah.)
Nick "Business is all about exploiting the opportunities" (while grinning at Kelly through the window, poor cow)
Jason: "Too much thinkin' makes you miserable" (Oh, so that's why you're such a happy chap!)
and finally...