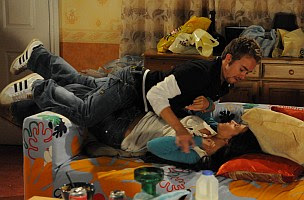 VERY Wrong end of the stick award: Gold Star: David got very aggressive with Tina! Eek! Luckily he really doesn't have sexual assault in him, whatever else he is.

She shoots, she scores award: Gold Star: Natasha went out with a very loud bang!

Selfish award: Gold Star: Sian's parents were busier bickering with each other and being totally unconcerned with Sian aside from trying to lay blame.

Crystal Clear award: Boozy Star: As if we couldn't already predict a drink problem for Carla, they have her taking headache pills with vodka. You couldn't be more obvious.

Wardrobe malfunction award: Natasha has been wearing that same dress since she took the overdose. Surely Nick, in his guilt or Audrey could have brought her something else to wear?

Top moment of the week: Eddie digging out a St. Christopher's medal to give to Gary to keep him safe.

Lines of the Week:
Nick "I won't abandon her in her hour of need" (And your hour of guilt)
Natasha to Gail "Back of the net!!!!"
Julie "It's short for 'Jujuniska twinkle toes'. It's a gay thing" Sean "No it's not"
Tyrone to Jack about Sophie "She's Lebanese"
Gail to Nick about Natasha "You've had a lucky escape" (I rather think it's the other way around)
Nick to Carla "we're supposed to be equal partners and you treat me like dirt!" (because you act like a caveman)
Trevor to Carla "I would rather be shifting rubbish than be treated like it!"
Sally to Kevin holding the baby "Aw, you're a natural!" ('Liar'... i think she meant to add)
Natasha to David about Nick "He's got something you'll never have. A Heart" (really? Where?)
Sally "There's never been a law about lesbians. I Googled it" (*snork* I *heart* Sally!)
Rita "If Graeme had another brain cell it would be lonely"
Graeme "I'm a convicted arsonists. I've got to have a housewarming!'
Posted by Tvor at 06:04

I think Deirdre deserves an award for moving in to Gail's job so quickly and then being so smug about penciling Gail in to speak to the doctor. Deirdre doesn't get too many funny scenes, but that one had me snickering.

Yes that was great, maybe a "Steal your grave before it's cold" award :)

Tvor... think that Natasha was talking to David about Graeme, not Nick... LOVED those smackdowns she gave to David and Gail!
Rebecca in TO

Hmm She had been talking about David and his brother so that's my perception. i don't remember her saying that about Graeme, i could be wrong though. I'd have to watch it again in context.

I think the other Rebecca was right. She was referring to Graeme and pointing out why Tina chose him over David.

Then i stand corrected. Thanks Ladies!