This was first posted by Chewy on the Coronation Street blog in September 2010. Reposted with permission.
While watching Corrie last night, I noticed something, the location Sophie was calling home from. It'd been used before, and quite recently too, as Cheryl's lap dancing club (the second one, where she only worked for a few days, not La Belle). Knowing the Corrie set quite well, I also know that it is very close by to where the old Davenports Garage used to be, which of course was under a viaduct - Which was the viaduct used for the original outdoor Corrie set!

Edited to add: This is actually a courtyard inside the Granada Studios compound. This staircase leads up to the area where the outside set is, which used to be located through another outside set called Baker Street. Well, it used to lead there. Now the Baker Street set is gone and a new studio building blocks the way. I'm not sure if the staircase will take you into that building but I'm guessing it might. This is a photo from my visit to Granada in September 2000 that clearly shows the staircase and our group going up for our set visit! 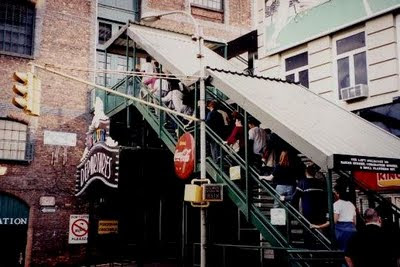 Goes to prove your original theory! :)