I suppose now we're going to be in for months of Molly stropping and glaring and snarling at Kevin every time he glances at the baby. Poor Tyrone! And Poor Tyrone in spades! We're going to lose Jack!!!!! Tyrone is about to lose the only man he regards as a father and the rest of us are going to be in puddles in the corner when it happens. Turns out Jack is behind the anonymous gifts people have been getting and he's betting on the horses and giving Tyrone money for the baby. What else is he going to do with his dosh?

Meanwhile, Molly gets cornered into spending more girl time with Sally, which can't be very comfortable for her but I am enjoying seeing her squirm. Odd, though, she *said* she couldn't leave Jack 5 minutes ago but then it wasn't a problem leaving him to go see the show with Sally. I know it being with Tyrone is a little different but i would think leaving a baby with an experienced mum would have been less nerve wracking than leaving him with a new dad. Except of course it was Sally and Kevin and that's the problem. 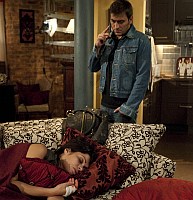 Nick has jumped from the factory...to about 30 feet to one side and has decided to open up a bar where Peter and Leanne had failed to. I suppose a lot of the fixtures and fittings are still in there. Shouldn't he have to pay Peter and Leanne for those? He sunk all his money into the factory and he wants it back. Contract or he'll sell it somewhere else. She should take that offer. It would be better for her financially in the long run. Instead, it gives her another reason to get legless so Peter can rescue her. But she's insisting on keeping it secret, even from Leanne. Now you can see where this is going, can't you? Trouble with a capital T. 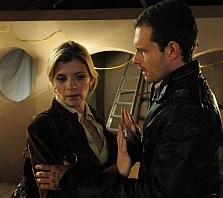 And more Trouble with a capital T, Nick is pushing Leanne to manage the bar for him. He's such a manipulator isn't he? He uses every bit of emotional blackmail he can dig up to talk her into it, knowing she would do it in a shot if he weren't the owner. But with Peter's approval, she's going to do it, working closely with Nick. How long before he starts niggling at her and telling her Peter doesn't deserve her and doesn't treat her properly? Even Ken is suspicious and I don't blame him. But...i do wonder...The Joinery was nearly ready to open when Peter and Leanne had it, then the factory was in there but how come it now looks like a construction site? I suppose Nick has remodeled the whole thing again.

Anna and Eddie had to face Gary going off to war and find out the same week if they're eligible for adopting. They are. Just an aside, though, how come we haven't seen Eddie trying to stop smoking if Steve and Becky had to? You can tell that even though Eddie doesn't show his feelings, he does have them. Sometimes. But when it comes to the sensitive feelings of the neighbours who didn't get approved for adoption, he's got as much sensitivity as a soap dish.

The factory bees decided they couldnt' go to work because Carla wasn't there and Hayley was off sick. But they still could have got the key from Hayley.

So we've seen the back of Trev. He never did really suit Carla though was good for her in the aftermath of the Tony story when she needed someone safe. It might have worked if she hadn't brought him into the factory. Janice is gutted though, she never did get over that crush. I say she's gutted but we haven't seen her face for ages! Where's Janice? We've also seen the back of Ryan who's going to uni in Glasgow. I won't miss him. He's pretty much always been a spare part. I wonder how he liked the Tardis, though, because he left for Glasgow in the dark and got there safely in record time. It's a 3 or 4 hour train journey, he said he'd be there near midnight. Michelle got a text saying he arrived. Getting in to Glasgow by midnight, and that's going to be in time to get himself a room in the university "halls" aka dorms? Are they a 24/7 administration? 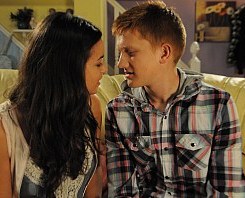 Kirk is getting advice on women from Tyrone to give to Chesney. Then all the other most gormless men on the Street get in on the act. What a laugh but Poor kid! This could be a disaster. don't know why Kirk went through all the bother trying to get condoms. Surely he's bought them for himself many a time from when he was living with Fiz and Julie, what's the big deal going to a pharmacy for Chesney? It's not like Kirk is Chesney's age and innocence. Ah but in the end, though i think it probably only took about 10 minutes total including undressing and dressing again, he just followed his own sense and they are now Love's Young Dream. Until Owen finds out.
Posted by Tvor at 08:32

Nick is a slimeball. I can't believe he suggested naming the bar, 'the Joinery'. Because, 'it's you and me now'.

How obvious can you get? I thought that Leanne was smarter than that. And then to turn around and manipulate Peter exactly as Nick had suggested. Argh!

I agree, Nick is a slimeball. Leanne should stay far away from him!
I have to admit that I read the UK updates too (Less often now that we have this lovely Canadian site, but still...) so I knew why Jack had come back to Tyrone and Molly's, but I was still a bit sad to see it is happening now on our screens.