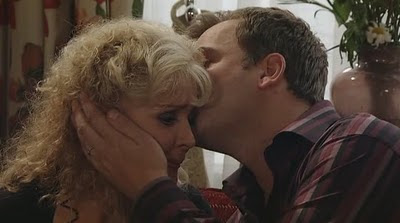 I think he's finally grown up! Mushy star: Steve! Awww he's realizing how lucky he really was with his family, rocky road though it were at times.

That's the way to impress the Social: Gold Star: Kylie getting drunk, staying out all night, showing up to the hearing drunk. Stealing from the Rovers' till and Becky's wallet and coming on to Steve when he caught her red handed.

Wearing Blinders award: Gold Star: Becky just isn't willing to accept that Kylie really isn't what she thinks and Kylie is very good at pulling the wool over her eyes. She won't even believe the worst of Kylie no matter who tells her about it.
Silver Star: Though he did ask her out once, Owen doesn't fancy Eileen and she doesn't see that he fancies her friend.


How can I miss you when you won't go away award: Gold Star: Gary wasn't too impressed with Kylie in the cold light of day.
Silver Star: Claire. Just leave already! You're on my last nerve, woman!

Vile award: Gold Star: Kylie coming on to Steve! Don't touch her with a bargepole, mate! You don't know where she's been (but we do)
Silver Star: Why is Nick so awful to Trev in the office? 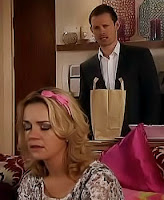 Down in Flames award: Gold Star: Natasha's lies are getting more and more out of control. Time is running out.

Lines of the Week:
Pam to Molly "You're messin' with people's hearts and hearts is fragile things"
Ashley "You just click your fingers and I'm just meant to jump?" Claire "You do normally"
Sunita to Claire "I hate seeing you like this" Claire "No, you hate feeling guilty. Deal with it!"
Rosie about models "we're not all thickos you know"
Kylie "I'm sick of being treated like muck" (stop acting like it, then) and about Becky "Did she have my top on???"
Steve to Kylie "Pull the other one" Kylie "Well i did offer!"
Kevin "visiting a mate and a colleague" Pam "Double the disloyalty, then!"
Steve "Rock. Hard place. Steve"
Quinny to Carla "I am a whiz at nighttime maneuvers" Carla "Well you're missing the target now" (shot down in flames!)
Kirk "Too much of a rebel, me. That's always been my problem" (Aww bless 'im!)