He is Ken Barlow 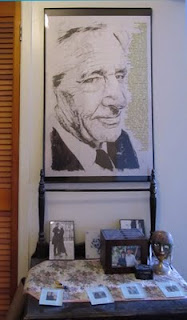 This is a poster sized print of a charcoal portrait of William Roache aka Ken Barlow. The original print is one of a series that were done by Corrie actor Steve Huison who plays Eddie Windass on our screens here in Canada. Steve is a very talented artist and he put on a show with the portraits and is now auctioning limited edition prints on eBay to raise money for his favourite charity, the Shoestring Theatre project in aid of mental health.

A few weeks ago he had some on eBay and I bid on several but the first two I tried for, I didn't get (Sue Nicholls/Audrey and Katy Cavanagh/Julie). This one was still ongoing so I put in a bid. I was outbid but only by a little and I was now determined to have it. Uhoh, I hear you say! Never fear, I sat and waited and watched and nobody else bid so with 20 seconds left on the clock, I entered my winning bid, just a little over the one that was the top bid and held my breath. The thing is, you don't know if the other bidder had put in a higher "max" bid that would automatically outbid your higher bid.

But it seems they didn't do that, and I won the auction and the print. I received it about 2 weeks later which wasn't bad for Canada Post and Steve also included one of his cast cards with a note on the back assuring me the money would go to the charity and thanking me. Result!

He doesn't have anything on the auctions at the moment, but hopefully, this link to his items will work for when he does. You can also buy his portraits from this site. They go for about £50 there. I paid less via eBay but your mileage may vary. Some of them on eBay were going for a lot more.

Here's a link to another blog post showing Steve holding this portrait!
Posted by Tvor at 18:12