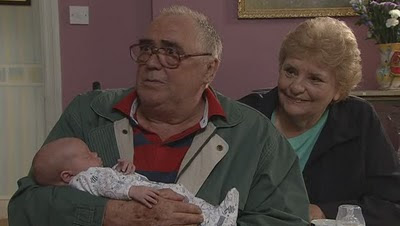 Heartwarming award: Gold Star: Jack kissed the baby and the baby looked up at him!
Silver Star: Man oh man, did little Alex Bain ever do a great job "crying" and confessing.

Nasty Mouth award: I think Michelle is getting awfully mouthy and opinionated and not in a nice way. Molly mouthing off at Kevin. Deirdre and Peter both sniping at Ken. Nick insulting Trev. Lawrence and James were horrible to each other. Ashley and Dev taking shots at Peter. Leanne and Cheryl bickering over their kids. Half the characters were full of fizz and vinegar this week.

Apples don't fall far from the tree award: Gold Star: Lawrence is every inch his father's son. Accademia, women, sweet tooth, poker up the backside. But at least Ken isn't homophobic.
Silver Star: Becky and Kylie are pretty much cut from the same cloth. Becky's just matured a bit. Kylie has a longggg way to go.

A Job in Name Only: So Kylie gets a job at the cafe and was only there the one day the one shift. Then she gets drunk and steals Mary's Motorhome. Yeah. That'll help.

You couldn't make this up award: Ironic Star: Sally delivering the baby that could very well be her husband's. Cleanest newborn i've ever seen, too!

Could you actually get to the point? Gold Star: I didn't think Ken would ever actually tell his grandson he was ok with gay.

The Smack Devendra line starts here: Good heavens, that man gets more and more opinionated, nasty and obnoxious. What does Sunita see in him? And how come Aadi didn't tell the Social he had a tumble with a friend? And Dev drinking his sorrows away before a supervised visit with his kids, that would help get the kids back, wouldn't it? And he was awful to Peter instead of being understanding. 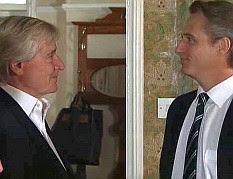 Deirdre about Ken's new family "pretty soon there'll be a whole row of new Barlows all bobbing about and demanding attention"
Nick "If I'm going to be pushing a pram, it's going to be a better one than that!" (And that is Nick in a nutshell)
Sally about Molly "It'll be her hormones" (Yep!)
Sally about the baby "It makes me think I've got a very special relationship with him" (More than you know!)
James to Ken "You, Ken, are a true sister" (Did you see Lawrence's face? Ha!)
Sunita to Dev "You just get my children back" (that's it, you'll never see them again if you leave it to him!)
Tyrone to Jack "You tricked me" Jack "Yeah. It wasn't hard!"
Dev "I'm not accusing anybody, I just want to get to the truth" (You're making a pretty good impression of accusing folk)
Posted by Tvor at 06:17