Impressions from this week's Corrie in Canada 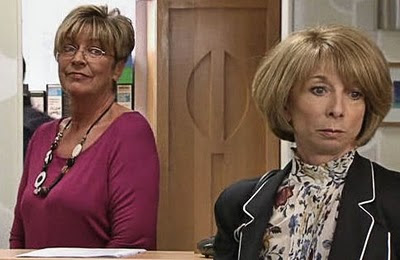 (This post was originally posted by me on the Coronation Street Blog in October, 2010.)

I just had to add a few notes to my usual weekly sum up of the show because one segment this week particularly had me reacting on a number of scenes:

Deirdre to the Doctor "Would you like a cup of tea and a couple of gypsy creams?" "Thanks, Deirdre, you are a treasure." *smugness* After the way Gail treated Deirdre after the trial, I should imagine Deirdre really enjoyed payback! Gail moaning that nobody is on her side and they're all judging her. Pot or Kettle, this week, Gail?

Nick SO had that thumping coming from Trev. He's been vile to him for weeks! That's the second black eye he's had in less than a year. He might want to rethink that personality.

GO Sally! Boy, did she ever give the Head Teacher what for!

Norris is going to have to eat a very large helping of crow with feathers on very soon once he finds out Graeme and Tina didn't steal his and Rita's credit card details. Can you say "back street computer fixer upper"?

And Boy, did David ever get the wrong end of the stick! Instead of making peace and being friends, which was where Tina thought they were. Even though all the media was screaming that David was going to rape Tina, I never thought The Powers That Be would go that far with him. He would be unredeemable and would have to go. He's far too popular a character for that. There was a time when I thought he might have had enough anger in him to do something like that, because, in his mind, he would be showing her he loved her (obviously, of course, that's not love) but he's been showing a lot of signs of maturity lately and a lot less resentment and I don't think he would have it in him these days.

Funny and dark storylines both, brilliant stuff!
Posted by Tvor at 10:23