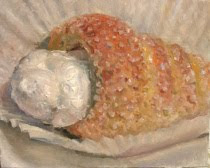 (This post was originally posted by Fat Brenda on the Coronation Street Blog September, 2010, reposted to this blog with permission.)

Well loves it's time for another cab eye view of Weatherfield courtesy of Aunty Bren.

I've had Eddie on the night shift with me this week and he's been ever so worried about his Gary's brush with the law. Apparently he gave some punter a right going over after he was horrible to Izzy. Between me and you, if there's one girl who doesn't need protecting it's Izzy. I tried to talk to her last week and told her I could sympathise about her being in a wheelchair because of the time I had an ingrowing toenail removed and had to use a walking stick for a week; she gave me a right gob-full! I reckon Gary's soft on her but he's been fandangling with that awful Kylie Granger girl, I think I'd rather face the Taliban than Kylie Granger!

The best news for me has been Eileen showing off her dazzling 'figures' for Owen, and failing to bag her man. I mean, come on, she does the same thing every time; puts on the Superdrug hair mousse to create that 'just been sleeping rough' look, wears a bit of lippy and tries to intoxicate her prey with a bottle of plonk from Dev's! Alas, it wasn't meant to be and Owen ended up getting a personal lock-in with the lovely Liz, I'd kill for her legs. Eileen has handled the situation like she always does, with a kebab, tons of chocolate and a large helping of bitterness. Still, at least she doesn't have to work nights like me, then she'd really have something to complain about.

Back to that Kylie again though; fancy making at pass at Steve! She's trouble that one, you mark my words, and if you think that kiddy's going to make her mend her ways then I'm afraid you're softer in the head than Becky! Twice she's tried to take our petty cash from the cab office telling us Steve sent her. She must think I'm daft!

So that's me then loves, I'm off home now for a Findus Crispy Pancake and a week of Jeremy Kyle on me Sky+. Remember, if you need a cab then just call Street Cars and I'll try to make sure it isn't Eddie who picks you up, he always goes the longest route so he can charge more and I've had enough of it!

If you want regular updates from the cab office then you can follow me on the twitter into-net web or your orange apple hi-phone here. See you next week for another generous helping of Fat Brenda's Cream Horn.
Posted by Tvor at 09:00