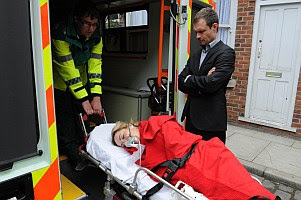 Natasha's lies finally blew sky high, with a nudge from Gail who really did cross the line no matter how much she disapproved or was suspicious. It was none of her business and a huge breech of the trust of the position working in the clinic to snoop in Natasha's records. All because she wanted to prevent a wedding that Nick must have thought was the next step. Every time Natasha works on telling him, he comes up with another trump card. Down on one knee to propose in the factory? It must have been a long jump down off that high horse. Did you see Natasha's face? It wasn't even excited when he proposed, it was almost hungry, eager, obsessed. (Have i said lately how much i really really dislike Nick? Part of me feels he deserved everything he got with a huge dose of guilt with a cherry on top. That's not fair to Natasha who was pushed to a desperate act but she was also the authoress of her own downfall as well.)

So there she was, with Gail banging on at her in one ear and Fiz in the other and every time she tries to tell Nick, he proposes or does something else sweet. Finally, Gail furiously told Nick and exposed Natasha for a liar. If she'd found out any other way, i would probably be on her side. I'm not on Natasha's side either but as i said, Gail had no right. The transformation to Ivy Tilsley is complete. Ooh and when she told Audrey, David and Maria, didn't David come back great, he knows that Gail loved being the one to tell Nick and he was right to throw it in her face that she kept from him the news that Tina was pregnant at all. She's probably won't lose Nick but it would serve her right if he never spoke to her again.

Nick doesn't go to his mother for sympathy. Would you? Nope, thought not. Where does he go? He makes a bee-line straight for Leanne (and Peter). Natasha was right about his wanting Leanne and Peter, being a naive sucker, even pushes Leanne at him for support in this time of need. *gag*

Leanne seemed a bit taken aback at the wedding announcement, didn't she? And she was right in there like a dirty shirt willing and able to support Nick in the hospital. Is she getting cold feet for her own wedding? Natasha didn't like her getting all friendly with Nick and that was part of it all. For all that Natasha was so obsessed with getting her claws into Nick, you'd think she'd have put both their names on the door buzzer, not just hers.

Eek! Flood in the Kabin! Now I got thinking about that. Years ago Derek drilled through the store room in the Kabin, that's that little back office area, and it went through the ceiling through the floor and into Reg Holdsworth's waterbed. That is the other flat, the one Tina and Jason own. Not the one Rita lives in. Yet when Tina and Graeme let Rita's bath overflow, the water came down all over the Kabin. Tina's been locked out of her and Jason's flat so it couldn't have been that one.

So, Rita has had her credit card details stolen. Right after Norris had the computer from the Kabin fixed by a fly by night. But he accuses Graeme and Tina? Let's think about this logically shall we?

Oh so Sophie and Sian are bunking down in a squat. ewwww...The accomodations suck, the job sucks, it's just not working out is it? Sian is more afraid of her father's reaction than being on her own but Sophie does have a supportive family. Most definitely a supportive sister that's for sure. Sophie called home and Rosie wasted no time making Jason drive her to find the girls. I'm surprised, given what Rosie was barely wearing, that Jason could even keep his eyes on the road! (Really, though, all she had to do was do up a few more buttons and it would have been relatively decent) Well they're back and Sally is gutted that Sophie thought she'd be that disapproving. Really, Sally is just trying to get over the shock and surprised of it all and in fact defended the girls to Sian's ignorant bully of a father admirably.

So it's not ok for Gail to be horrible to Natasha but Nick can treat Trevor as vile as he wants to? Not in my books he can't. Norris got burned cheese on toast in the cafe. Surely Roy isn't allowing Kylie to do any cooking? Kirk got off that assault charge. No evidence. Wonder why they didn't go back after Gary? Seems Gary isn't having any more of what Kylie is offering. Smart boy, stick with Izzy, mate, she's a little belter.

Seems to have taken the thought of Ciaran moving to Glasgow to make Michelle realize what she wants, him! Eileen is taking her revenge out on Owen and his bank accounts, getting back on him for treating Jason badly and for leading her on while hopping in the sack with Liz. This could be bad. Kylie is continuing to wrap both Steve and Becky around her little finger. She knows darn well that Becky wants Max and is quite willing to let her have him but it'll be on her terms and the hoops she's got them jumping through are massive.
Posted by Tvor at 11:05