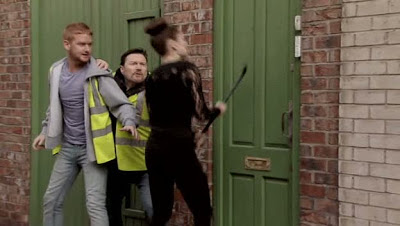 It Must be Genetic Award: Becky went on a rampage with a sledgehammer. Kylie went on one with a crowbar

Pants on Fire award: Dennis has a job but it's a lollipop man and he hasn't told Rita what it really is. Kylie is lying about taking her birth control pills.

Harsh award: David said some horribly hurtful things to Kylie when he found out about the pills. He wasn't very nice to Tina either. 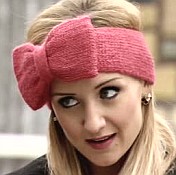 Impeccable Timing award: Peter shows up seconds before the taxi to the airport leaves.

Showdown at the OK Corral award: Steve and Dennis facing off at the crossing.

Tit for Tat award: Steve thinks being barred from the Kabin is petty and vindictive but he's the one that bragged about his own capacity for the same isn't he?

Multitasking award: Unlike men watching tell, women like Eileen can watch and listen to conversations and take it all in too.

Tradition award: Either Rob hasn't opened that filing cabinet since Carla left or he's keeping up the long standing tradition of keeping a bottle stashed in the factory office.

Lines of the week:
Tommy to Tina "You are an experiment. You are a test tube with legs"
Tommy "I didn't put any pressure on you, I put you first" (not much you didn't)
Nick to Lewis "You're her new pet project. Not seen her this happy since they brought back Dallas!"
Norris "My foot arrangements are my own business and I'll thank you not to broadcast them to all and sundry" (You mean like you do with everyone else's business?)
David about Max "You were up the duff before you even knew the father's name. The kid has been dumped more times than Britney" (harsh!)
Stella to Tina "Go home and take the weight off your gob"
Steve to Dennis "Fascist!"
Steve "When it comes to pettiness and stupid vendettas, I am the Master" Lloyd "You're the Obi Wan Kenobi of Small mindedness"
Kylie "What's daft about cold blooded murder"
Steve about the Kabin ban "That's petty and vindictive" (Tit for tat, I say) Rita "I believe the phrase is... Sling yer Hook!"
Carla "Peter gets to see Simon and I get to count the days through gritted teeth."