Manchester's School of Theatre is proud of their Krissi 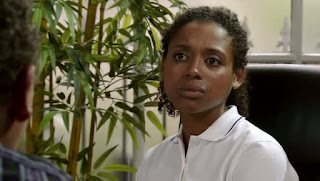 (This post was originally posted on the Coronation Street Blog October 2012, reposted to this blog with permission.)

Corrie actress Krissi Bohn graduated from the Manchester Metropolitan University's School of Theatre in 2004 but it's been an uphill battle trying to get work. Krissi had pretty much given up and was training to be a health care provider when her former agent called with news that Coronation Street was looking for someone and she just might fit the part. Coincidentally, the part of Jenna is a physical therapist as well as the newly discovered daughter of Lloyd Mullaney.

Krissi is having the time of her life and has recently tweeted "I love being Lloyd’s daughter". This job has changed her life, she says, and her former tutors and fellow students couldn't be happier for her.

I think Jenna is a great character and I think Krissi is doing a wonderful job! I look forward to her upcoming storyline as Jenna helps Sophie recover from her accident.