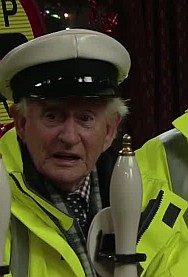 Dennis gets to be a Traffic Management Operative" and they didn't guess that meant a crossing guard? Or Lollipop man as they call them there. Dennis wasn't admitting it but you know there's a long tradition of it on the Street, nothing any worse than Ken being a grocery store trolley pusher after all!  I wonder how long it will be before Rita finds out what Dennis' job really is? Rita is ironing ties for Dennis for his new job which is obviously not a shirt and tie sort of thing, not with a blinding yellow crossing guard jacket on!  Dennis doesn't seem to be too happy about his job and embarassed for people to find out. I suppose he thinks it's demeaning but it's a responsible job. His coworker Malcom, though, what a cracking character!!! Of course someone catches Dennis and it had to be Steve.

Steve has discovered his secret! And isn't he having fun making pointed remarks about lollipops! Except now Dennis and Steve have fallen out and this means war! The other lollipop man turned Steve in for taking the crossing sign and brought the cop to the pub and the secret was out. Looks like the night for it. Rita forgave him, of course.  Rita's now being uber supportive of Dennis' job and wanting to go watch him work. I'm not so sure that's any better than not knowing what he's been doing at all! But Dennis and Steve are busy winding each other up. Steve has decided to bar Dennis from using his cabs. Annoying Rita is probably the last thing Steve should have done, though. Retaliation? You're barred from the Kabin. You and all your mates. LOL And Steve was upset because he couldn't buy his cigs. Walk 20 feet across the road and get them at Dev's!  Oh it's going to end badly. But it's fun!

Norris, meanwhile, continues to annoy me to no end. He's not happy when Rita tells everyone about his foot problems because it's none of their business and yet he wastes no time spreading gossip even when he's been asked not to.

Tommy's got a hangover and Tina's got a belly full of resentment and disgust. But you know what? If this was Tommy's baby, would he be urging her to get rid just because she's having a bit of a hard time so far? I doubt it very much. She does sound like she's having second thoughts too, not just about Tommy because it's a big thing, having a baby even without having to give it up. Her hormones are probably already surging.

She was honest with Izzy and Izzy was understanding but Gary certainly wouldn't be, single minded as he is about it all. But though she didn't put any pressure on her, Tina is going to go through with it. She's really not that sick. I've known people that were in far worse shape and got through it. She feels she's doing the right thing and if he can't deal with it, he should go (again). How many times will he slope off and come crawling back? Rita is sympathetic to Tommy who sees it as black and white. Gary is a nervous wreck and Izzy is worried but pragmatic about it all. Tina is keeping her promise which makes the Windass/Addams family happy but them splitting up has a few eyebrows raised because nobody else knows the real story. Tommy has to put up with everyone thinking he's a dog for leaving Tina while she's pregnant.

Well if he's abandoning her, she shouldn't need to pay off his debts with the rest of the payments. It's a selfless thing she's doing for someone else and doing it for Tommy and while he's got a right to feel the way he does, I don't think he has a right to make her choose. And Tommy put the icing on the cake by blabbing it to everyone in the pub. He hasn't told them about the money. Yet. Probably only because it's his debt she's paying off. Tina told them all where to go. I really don't see why everyone thinks it's abnormal and weird. It's a kind and generous thing Tina is doing and a lot of people wouldn't do it. And it's not "selling her baby". Dennis seems to be more sympathetic than anyone else that's heard about it so far. That's why I like him. Sally was kind too but I think she was more interested in finding out more gossip.


Simon wants to see his dad, and thinks his dad will be home to see him in the Nativity play. Leanne doesn't think Peter is coming back because of the fawning letters he's written. Nick thinks a trip to California might cheer up Simon for Christmas and a Vegas wedding might cheer up Leanne. Oooh she likes that idea. Looks like Leanne agreed to the trip and wedding but Stella doesn't get to go with them for the wedding. Simon was ok with it too when Nick explained how important it is for him to be there.

Leanne is excitedly looking forward to their trip to America even if she had no clue that Las Vegas was in the desert. Eva's jealous. Stella's happy for them but Eva makes out like Stella's devastated. It's just another way to try to scupper things or at least pour cold water on it. Everyone gathers to say good bye and good luck. They nearly made it out of Weatherfield but .... Peter and Carla are back!!!

And was it me or was Peter hugely smug about stopping the holiday and potentially the wedding, under guise of a new Californian serenity. Because you can see the acrimony already rising between Nick and Peter and Leanne doesn't trust Peter to run back to LA with Simon behind her back. Yep, Peter most definitely looked smug at the cancelling of the wedding. Nick is pissed off because Leanne won't go away with him and Peter wins. The pull of his son is pretty strong. Eva was happy to hear the wedding was off until Nick broke the news that they've rebooked the wedding for Christmas Day. Leanne looked right chuffed. Eva had a Gordian knot in her face.

Rob was not pleased to see Carla back in the factory one little bit. And she sure made her presence felt. She ruined Rob's new contract meeting quick enough. Sounds like Rob has been cutting corners and trying to sell cheaper merchandise and lower the tone of the business.  Looks like Carla has a reason to stay home too except she doesn't want to stay. And the prospect of being back in Weatherfield and maybe staying drove Carla straight to the bottle. Obviously though Peter had been in a Zen program for alcoholics in L.A., Carla wasn't. And if Peter and Carla are staying at her flat, well so is Rob and that's not going to work well given their clash already. 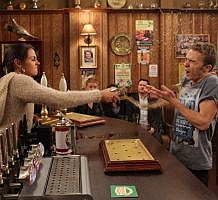 The more David pushes Kylie the further she's going to run. And the worst person in the world to find out, Gail, discovers her pills, the worst person that could have. She's sympathetic but she's right. Kylie has to talk to David about it. Thing is, David isn't taking it well. David doesn't want to be an old fart father. Um. He's only 21 or so. It's not like he's going to be an old fart in even 10 years. All he can do is put more pressure on Kylie and it's going to end badly for them. David found a sympathetic ear with Tina after a row in the pub. They dragged up all the old history. It's nice to see how much David and Kylie love each other but they're at cross purposes and their communication skills need a bit of help.

David has woken up on Tina's sofa, hungover and having spent the whole evening yammering on about Kylie. This guarantees that Kylie will get the wrong end of the stick especially after everyone assures her he's loyal. And she knows Tina's his ex and is pregnant which is also a sore spot with Kylie. David is in no  hurry to face Kylie because he's scared Kylie will chuck him and Kylie's scared David will chuck her. 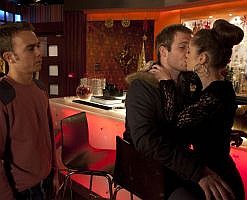 Tommy is moaning to Tyrone who reckons Tommy could fix things if he really wanted to. But he doesn't really. Not while there's a baby on board. But he tried to talk to Tina and discovered David coming out of the shower. In keeping with his recent status as Gob Almighty, he went straight to Kylie. Kylie isn't ready to believe Tina's story unless Tina's getting paid. Well so much for a cleansing talk. They shouted and screamed and insulted and it all fell apart again. He went straight to the pub to complain to Tina who pushed him back. Kylie's revenge was to snog Tommy in front of David. These two look set to self destruct!

Lewis is still posing. His back was only bruised so by rights it should be improving by now. Gail doesn't have a clue. He's got Gail pushing him around now. Lewis is letting Gail fuss and now he's asking her out on a thank you date. It looks like he's trying to make her fall for him, probably to dump her cruelly. Lewis is leaving Gail's and she seems well and truly bonded.

Eva's head gear is growing! Kevin gave Tommy his job back! Kirsty organized a night out for her and Tyrone who doesn't want to spend any extra time with her than he has to. Kirsty's romantic advances didn't go over well and he managed to get out of that early night. Meanwhile gossip is spreading about the pregnancy. Stella is non-committal but Mandy is sympathetic. Mandy is also winding up Stella over Jason's crush. She wants to find a man for Stella, mainly because she can tell there might just be a mutual thing going on with Jason. The matchmaking Eileen and Mandy are planning is bound to go horribly wrong. It always does.