It's Grim up North 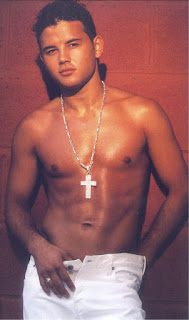 (This post was originally posted by Scott Willison on the Coronation Street Blog in December 2012.)

An older woman lusting after a younger man can be an unseemly storyline. Despite the trend for "cougars", Corrie has steered away from it, probably because the one-two punch of Gail & Martin and Deirdre & Samir back in the 80s put everyone off the idea.  The storyline is coming back now with a vengeance, as Stella girds up her middle aged loins for a ride on a young stallion.  This storyline would have a severe "ick" factor if the object of her desires was anyone other than Jason Grimshaw.  Because, let's face it, you would, wouldn't you?

Jason was brought into the street at the turn of the millennium, the elder son of the perpetually harassed Eileen.  Right from the start, his character was established: he was stupid, and fatally allergic to shirts.  He struggled on with his disability, managing to go a few episodes at a time before finally crumbling under in pain and stripping to the waist.  He would hide his affliction under excuses - "I'm just ironing a shirt", "It's a hot day", "I was mugged and all they took was my hoodie" - but the truth was far more tragic.  Eileen and his half-brother Todd understood this was an affliction, and took it in their stride (in fact Todd had a minor case of the same illness himself) but it took the street longer to acclimatise.  Now Norris and Mary don't even blink an eye when he wanders into the snug with his nipples out. 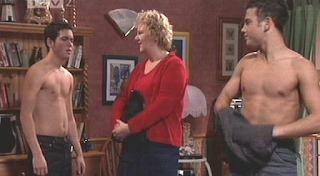 At first, he worked for Sally Webster in her now long-forgotten hardware shop; that job ended when it burnt to the ground, and instead Jason took up work as a builder's mate.  This was the perfect job for Jason.  He could work outdoors, remove his shirt whenever possible, and he wasn't required to do any of that complicated "thinking".  Furthermore, he was able to use the building jobs to hook up with random lonely housewives, including one who looked an awful lot like Carla Connor.  He even tried it on with Gail Platt once, after he misinterpreted her request that he sort out her drippy gasket.

Far more suitable dalliances followed with Candice and Sarah-Louise, before he set up home with The Lovely Violet, the nicest person to have ever walked the cobbles.  Violet cared for Jason deeply, but their relationship was deeply unequal; she knew how to turn the tv over using the remote, while Jason would just bang the box with his forehead until it changed.  Fortunately Violet and Her Fierce Neckerchiefs were able to look past the empty interior and simply revel in the attractive exterior, as though he was a particularly dopey labrador.  They had a great time together - including one memorable episode where they came home from a night on the town, clearly tw*tted on ecstasy, which somehow slipped right past Ofcom - until Jason dumped her for sharing a single snog with his boss, Charlie.  This overreaction was put even further into context when they got back together but Jason started schtupping Sarah-Louise behind Violet's back. 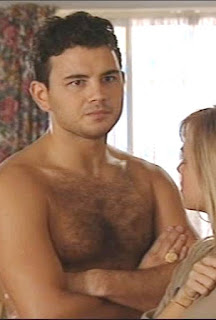 In the interim, Sarah-Lou had been knocked up by his gay brother, so you'd have thought she'd have steered well clear of any Grimshaws.  Unfortunately her current boyfriend was a binman who liked bringing his work home with him, while Jason's firm biceps was just over the road, so why not?  Jason was eventually bullied up the aisle by the junior Platt, because as with everyone else in that family, she knew that a wedding solves everything.  A moment of clear, intelligent thought overcame him in the loo, however, and the idea of being a son in law to Gail and the father to the Satanic Bethany for the next forty years drove him out of a tiny window and running down the A53 as fast as his morning suit would allow.

Sarah-Louise and Jason circled one another for a while, before he was finally harassed into going down the aisle with her again.  She was a girl who just saw a man screaming "leave me alone you mental bridezilla" as a minor sleeping policeman on her path to happiness.  David's attempted suicide on the same day should have given him a clue about what he was getting into - and Sarah's absolute refusal to give a toss should have given him another - but somehow, against all odds, the philanderer found himself married.  The marriage lasted for about three minutes before Sarah-Louise realised that though the package was pretty, there was nothing inside, and so she vanished to Italy to become a high-flying businesswoman (cough).

Despondent, Jason threw himself under the nearest trainwreck, in this case Becky Grainger; they were engaged for a while, but it would take a cyclone to calm Becky down, and Jason simply wasn't up to the job.  She dumped him for Steve McDonald, and after a couple of hours of blinking and Eileen explaining what was happening to him with flash cards, he realised he was hurt.  Then he had a pint and forgot all about it.

Fiancée number three was Tina MacIntyre; they bought a flat together, since it's easy to get a mortgage if you are a navvy and an assistant in a sweetshop, respectively.  I'm not saying they were directly responsible for the economy crashing, but neither of them were Robert Peston.  That relationship went for a Burton after Tina's father accidentally killed himself; though they were physically well matched, Tina's shrill insistence on grieving for her Dad, at length, twenty four hours a day, hurt Jason's brain and he was frankly glad when she hooked up with the far more soulful Graeme. 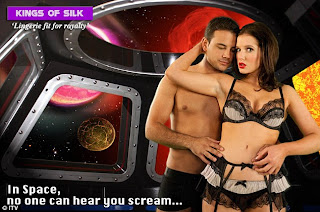 And then came his rightful pairing, the fish to his chips, the tea towel to his soapy mug, the spark plug to his Rover 500: Rosie Webster.  Living on opposite sides of the Street, they'd somehow never noticed that they were both hot and thick, and were therefore perfect for one another.  Soon they were having filthy romps in builders vans before modelling in scanty underwear; we never found out what "catalogues" these were for, but I'm guessing they weren't the type to feature Lulu in a chunky knit.  Rosie had found the perfect man for her enormous ego - one who was perfectly happy to be lead around by his lower lip, only asking to be fed and watered now and then.  Jason saw a happy future ahead of them, spawning a series of physically stunning children who were too stupid to operate a door handle.  He didn't count for Rosie's ambition, and she vanished to become a contestant in a game show that Endemol would dismiss as too tacky, leaving him heartbroken.  Until someone asked him if he fancied some darts, and then everything was ok again. 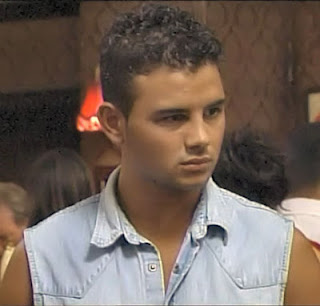 Now he's recoiling from another airhead dumping him, in this case Maria.  She claimed it was because she'd fallen in love with her gay best friend; in reality, she'd just got tired of Liam and Jason arguing over who had the best house in Balamory (Jason was a big fan of Archie the Inventor's pink castle).

He's pushing thirty now, and needs to be careful.  Being nice but dim is fine when you have pecs you could bounce ping pong balls off, but once the muscles start to sag, you're just Kirk with a prettier smile.  Perhaps it's time for him to sign up for an evening class.

Brilliant synopsis of Jason's life. Well done. I had forgotten the hardware store!