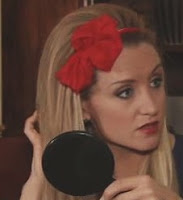 Fashion frippery award: Why does Eva insist on wearing those silly things in her hair? She's no Raquel Wolstenhulme!

Backpedalling award: Leanne has to make up for knocking Nick back because she can't exist without a man to take care of her, after all.

Foreshadowing award: Mandy is convinced Kevin won't get anywhere with Jenna because Jenna's a dedicated career girl. Not that she'll actually end up with Kevin, no, because why would a lovely 28 year old fancy him? But because maybe she doesn't fancy men at all! Just guessing.

Keener award: Jason's supposed to be a builder. Are they allowed to start so bright and early?


Sneaky award: Fraudulent star: Lewis faked his back injury to get his feet under Gail's sofa.


Misery award: Poor Eva, shot down again and having the indignity of watching the man you want get engaged to your sister!

Bully Boy award: Owen really does ride roughshod over his staff and won't let Jason price jobs or buy into the business because Jason's too honest.

Brotherhood award: Fraternal star: No matter what's happened between Tyrone and Tommy, Ty can still turn to him and Tommy will be there for him.


Lines of the week:
Beth "I was like a Barbie, me, and what I had was 100% natural" (Steve always said she was a model when he first dated her so it must be true!)
Ryan "mumble mumble mumble.. I'll see you around"
Lloyd "Is Kevin Webster chatting up my daughter?" (Yes)
Sally "I don't know why everyone always thinks I'm trying to be Teacher's Pet" (while Kevin motions to Beth to stay schtum!)
Dennis "I don't have to carry money around with me anymore? Why didn't you tell me this before!" (Aw bless)
Lewis to Gail "There are people around here who may accuse me of flattery" (Really?)
Lewis to Nick "You're in a good mood this morning' Gail "It'll pass"
Gail to Kylie "I always manage to get here on time" Kylie "Maybe I should get myself a broomstick and all, then!"
Lewis "It's an old skiing accident. It's been downhill ever since" (And so he "slopes" off to Gail's house!!)