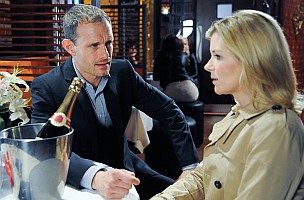 Bad Timing award: David, if you're going to ask Kylie to have another baby, asking her in the middle of a busy restaurant is definitely  not the place to do it.

Trouble stirring award: Platinum star: Kirsty's campaign against Fiz caused injury and threats but at least Tyrone can't deny it anymore, he overheard the admission of guilt!
Gold Star: Eva is miserable and Kylie doesn't like Leanne so they're going to make sure Leanne and Nick split up too.
Silver star: Lewis is working on Gail. Getting her to do his laundry this week.

Pointless award: Steve and Michelle. What's the point? All he does these days is get at Rob. I think Michelle and Rob make a better couple, frankly.

Fashion Ick of the week: Eva's red sheer dress looked fab until she turned around and the whole back was out, and her black bra was completely in evidence.

Fashion shout out: I love Mandy's clothes and matching hair bands! Loved Beth's red t-shirt with KISS ME on it in glitter.

Directionally challenged award: Kirk ended up off the south coast of England at the Isle of Wight instead of half way to Scotland in Preston!

Lines of the week:
Lewis to Gail "You're the Koh-i-Noor of Coronation Street"
Lewis "It's been a blast but I have a sink to plunge"
Rita "Blitz were a novelty at first"
Rob "If you'd just let me speak..." Eva "And say what? She was turning your bed down?"
Marcus "What's with the face, then" Maria "It's the only one i've got, different from you"
Leanne to Eva "You having man trouble. It's hardly news. As surprises go it's right up there with the sun rising"
Rob "Everly Brothers. Made me mum cry every Saturday night. That and the Baccardi"
Rob on the phone to Kirk "You were meant to go to Preston. What're you doing on the Isle of Wight!" (300 miles in different directions, too!)