Jason couldn't get Owen to pass over his tools so the next best thing is to sic St. Ella on Owen and she'll sort him out. Piece of cake. (Now wait, Jason had the money to invest in Owen's business. Why didn't he have 1000 pounds to buy some tools?) Why is Jason complimenting St. Ella? Because he's a nice guy? Maybe. Why is St. Ella wearing tight dresses and practically sitting on his lap? Because she's a loose woman? Maybe. She's back in the advice business again, I see, offering to help Jason with the paperwork for his job. Jason is feeling stupid because he can't understand the VAT and paperwork. He's better with his hands than with his head.

Mandy thinks both Jason and Stella fancy each other. I think i'm going to be sick. I really don't believe that Jason would fancy St. Ella. He may have gone after bored housewives back when he was working for Charlie Stubbs but the last one we saw him with was played by the woman that is now playing Carla. Vast difference between Carla and Stella.


Chuckled at Beth trying to get a refund for the broken biscuits she ate! Dennis is having trouble getting to use his debit card. But thanks to Beth getting him to buy drinks for the rest of them, he hit his minimum charge! Still, is Norris' suspicions right? The card was rejected but Rita's money is intact, they'd only flagged the card due to unusual activity, that's all. Dennis buying Rita all kinds of gifts only fueled her consternation. They made up though and Dennis is determined to get a job. 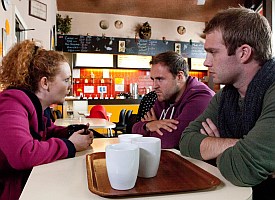 Tyrone almost made it out but then you knew he wouldn't go, didn't you? So it ends up that Fiz helped talk Tyrone into staying after some advice from her solicitor. Now he thinks it's a good idea to marry Kirsty so he'll have some rights over the baby. But how does he convince Kirsty he loves her enough to marry her when he's lost that lovin feelin. Hard to see him go back home to face the music because he will, you know. At some point.

What's even harder to watch is Tyrone asking permission to take the baby to the doctor. Kirsty and Fiz have to work together but you know if it's up to Kirsty, Fiz will be out on her ear. Kirsty wanted an apology and she got a grudging one but it wasn't enough. Everyone's trying to get them to make friends but it won't happen. They know the truth even if nobody else does aside from Tommy who stole into the factory at dinnertime to talk to Fiz about it all and Kirsty caught them at it!

Tommy and Fiz managed to cover their tracks but Kirsty is suspicious and she twisted everything and lost her rag in front of everyone. Fiz has that red headed temper and it's hard to keep it tamped down when Kirsty is winding her up and she's seen Ty's bruises. Kirsty attacked and Fiz fought back and Tyrone got into the mix. He publically tore Fiz down because he had to and Fiz let him to keep him safe. She pretended she'd been chasing Tyrone and the gossips are having a field day. 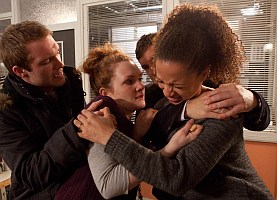 Fiz ended up getting the sack because she looks like she's in the wrong thanks to Kirsty. But shouldn't it be a matter of last in first out? It must rankle Kirsty that everyone is on Fiz's side. She should be glad Fiz admited what she suspected and got sacked but she was about to leave Tyrone over it all so he asked her to marry him. It took her a few minutes but she said yes once she'd calmed down. Kirsty lorded it over Fiz in the pub, passing out fizzy wine to everyone but her and she left with a sad glance at Tyrone who, at least, managed a weak smile in her direction.

Ty and Kirsty have a date set for the happy day. January 21. Sally was...well.. Sally. Churlish about the wedding after the baby but that's the way everyone's been doing it on the Street these days. Fiz has asked for her job back and Kirsty says she's not going to cause any trouble and Fiz promizes, too. Sounds like Kirsty plans to continue to intend on messing Fiz around at work, too but she didn't get the chance. Rob overrode Michelle. What happened to the old "we'll strike!" move that they usually do? Chesney let rip into Tyrone though none of it is his fault, at least not that Chesney knows. 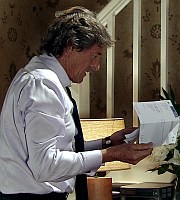 Lewis managed to get his feet under Gail's sofa on the pretense of his back injury.  Her idea is to let him use Max's room because he couldn't climb his own stairs. But he has to climb them at Gail's as well. She can help him up her own as easily as helping him up hers. tsk. And naturally Gail keeps her bank statements in a cabinet where anyone can find them. But i can't understand why Lewis might be going for her cash, she probably doesn't have a lot of it.

Lewis is very good at pretending to be in pain but  it did seem to throw him a bit when he heard about Audrey's reaction. It didn't last long, he practically twirled his moustache in anticipation of his scheming. Audrey's checking up on things and she and Gail are at odds, leftover acrimony from Gail's part in all that and Gail taking in Lewis out of guilt isn't helping. Audrey really tore a strip off Gail (and made her "Audrey noise" 3 or 4 times in that one scene) for what she sees as further betrayal. Gail is trying to get the whole family on board but it's not going to work with David except Audrey wants him to spy on things for her. The dinner party was a bit of a washout. Gail heated the plates up to burning temperature and David took potshots non stop. Oh heck, now he's got her massaging his back!

The smack line for Tommy starts to the left, ok? Tina talked Owen into hiring Tommy. I suppose it would work, though he's not a trained builder but then neither is Gary and he's able to lift and knock a hammer about. His reaction to the job offer was underwhelming. And everyone is fussing over Tina's every symptom like she was breathing her last. Tommy can't even cozy up to Tina because she's pregnant. Would he be like that if it was his baby? I bet not. Prat. He was doing so well, what with making a lovely pudding for her. 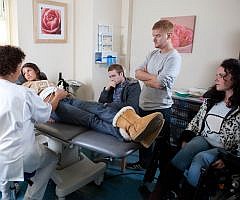 Tommy doesn't really want to have any involvement with the pregnancy so Tina probably does feel like she's doing it on her own. Well, with Gary and Izzy "helping" and everyone hanging on her every ache and pain. Tommy continues to moan. Rita guilted him into going to the scan appointment and he sat there surly and sour the whole time. Unfortunately, Tina fainted in public and Gary opened his gob infront of Gossip Central. Again, the doctor always finds time to leave the surgery and come out for emergencies.

Thanks to Norris, everyone knows about the baby and they all think it's Tommy's which is only going to add to his reasons to sulk. David put a particular idea in his head. I do agree that the Windass clan are haunting Tina. I do think that's creepy at least but even so, I'm appalled that he suggested she have an abortion and threw her past one in her face. I really think he's blowing it all out of proportion. Tina won't be vilified for carrying a baby for someone else. The money side of it? Yes that might give negative reaction.

Oh and I think we need a smack line for Norris, too. Cue me grumbling about Dennis not having any money of his own again. But why shouldn't he be using a joint cash account? Rita gave him access to it. Emily may be right, the card is a novelty and I can't see that Dennis would be spending huge amounts. Still, the card was declined in the Bistro. Was it because he'd cleaned out the account? No of course not. Just unusual spending patterns but it put Dennis out looking for a council job and Norris can't utter enough nasty and critical crap. Then laying the Grinchness on Mary's plan to decorate. No surprise there.

Oh wow, Mary really is finally holding actual theme nights in the Bistro! Jamaican night is in the offing.

Kylie's plan to show David what having a baby around would be like It backfired on her, though, because he coped just fine. His baby making efforts have been a bit stymied by Lewis taking over Max's room. Solution? A hotel room but Kylie had to work again. If David and Kylie can't afford new trainers for Max, how can they afford a hotel room for the night? 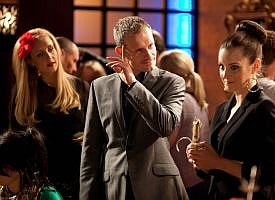 Meanwhile, Gail forgot to tell Nick about another large Christmas party and Kylie decided to handle it all on her own. Wouldn't the Bistro have a proper reservations booking book? Kylie played a blinder sorting it all out and Nick really respected her for it. In fact, he gave her a promotion to assistant manager. You could see pride beam out of her eyes but David wasn't too happy she blew him off the hotel night. She also admitted to Eva that she's still on the Pill.

And, of course, at some point Eva will let David know that Kylie is still on the pill.

Oh it will come out, that's for sure.

Who is in charge at the factory: Michelle or Rob? I thought Carla put Michelle in charge, and then Rob showed up. I'm not sure Rob had the right to "re-fire" Fiz, and wonder that Michelle didn't argue the point more forcefully. What's good for the goose is good for the gander; the situation makes both Michelle and Rob look less than managerial.
fondue123

Plus, isn't Rob being a bit stupid firing Fiz, considering Fiz was injured after he told her to try to fix her broken machine herself? Um, does Fiz know what a lawsuit is???
fondue123

I know what you mean. and i do think Rob was put in charge with Michelle the admin/assistant but yeah, you'd think Fiz could threaten a tribunal but I suppose with the upset, he could use that as his justification. Reality in the workforce has never been Corrie's strong suit!