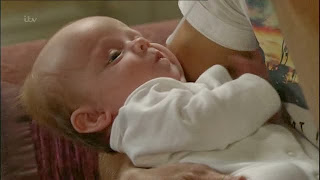 BFF award: I really like Carla and Hayley's emerging friendship.

Oldest Trick in the Book: Tim only had a few coins in his pocket, not enough to buy drinks so Sally had to pay.

Secrets and Lies award: Daddy Connor lied about the real reason he left Ireland. Mum's not away, she chucked him out. Steve isn't lying exactly, but he's keeping the pub sale a secret.

Baby Acting award: You could tell that baby did not want something stuck in her mouth!

Start as you mean to go on: Don't work through lunch on your first day, Eva, they'll expect it every day.

The truth is out there. The baby is David's!

A Telling Tale: The letter with the truth is hidden in the DVD case for the King's Speech. 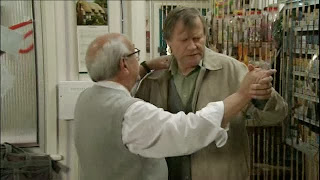 Twinkletoes award: Roy is not one of life's dancers. Nick is on his feet and walking!

Lines of the week:
Kylie about Tina "I wish she were ugly"
Sally "I'm not someone who likes to complain" (yes, you are)
Sally about a tarted up Eva "Can you imagine employing someone like that as your personal assistant?" Tim, rolling his tongue back in his head "Only if I tried very hard"
Barry "When two people have been together for so long, they need a break!"
Stella "Steve McDonald. International man of mystery"
Kylie to David "Two kids. No sleep. One paintbrush and a slag"
Nick "If it's mine I come clean, if it's not, I don't"
Audrey to David "I'm just wondering when you got to be so romantic"
(You *are* new here)
Tracy asks for her regular, Tina "can't remember". Tracy "That's probably because you can't remember what shade of orange to paint yourself in the morning!" (Hah! the fake tan rears its ugly head!)
Deidre "Must be nice having a sign over your door. Should I get one?" Tracy "Saying what? Abandon hope all who enter here!"
Steve "How am I supposed to do two jobs?" (you did it before, why can't you do it now?)