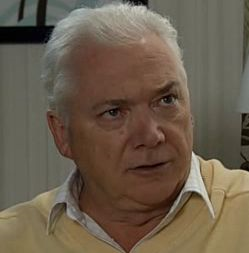 (This post was originally posted by Clinkers (David) on the Coronation Street Blog September 2013, reposted to this blog with permission.)

Let joy be unconfined at the news that Daddy Connor is wending his way back to the fair cobbles of Weatherfield. Could it be that this time, Barry Connor, daddy of eye-rolling Michelle and grand-daddy of little Lee-yum, is staying for a while?

Since the halcyon days of rum-toting Albert Tatlock, the Street has not been particularly well-served by the later middle-aged gentleman. Dennis Tanner comfortably fits into this category but he's still got a fun-filled slightly juvenile approach to life. For a while we had Bill Webster, a builder of the old school who sported ink dating back to the days when it was less of a fashion statement. However, Bill's appearances are sporadic at best and he now seems to have been shunted off to Germany in an unsatisfactory plot device. Did Auntie Pam go with him or is she still shuffling around Tile Street with a basket of withered ham baps?

The post-Tatlock years have not really been all that fruitful for the silver senior brigade. Chalkie Whiteley, who always looked  a bit grubby, came and went in a relatively short space of time. Of course there was that other old soldier, Percy Sugden. He arrived as a fairly jovial bloke but over a decade managed to just become annoying. Cooking under fire, being rude to poor old Phyllis, interfering in Mrs Bishop's (never Emily, note) life - on it went. It took the arrival of the Battersby clan to finally move him from his comfortable berth.

Percy's only real aged comrade at the time was his rival for Phyllis' affections, Sam Tindall. Sam was a curiously camp old man who seemed to bark out every line whilst clutching his little dog. He made numerous appearances between 1985 and 1989 but never really gelled. Neither did Hilda Ogden's would-be suitor, Tom Hopwood. Tom was Sally Webster's nattily dressed uncle (who she conveniently forgot about) who doffed his trilby in Hilda's direction and escorted her to various dances. Another low-impact oldie who was quickly dispensed with. 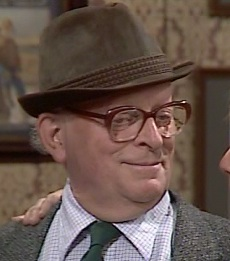 In more recent times, we've had to contend with the mega-dull Keith Appleyard. Who? Exactly. He was Angela Harris' slightly dreary dad. Mind you, given the rest of the family, his normality was originally quite refreshing. Tight-fisted Keith dallied with the fragrant Audrey for a while but old Aud expects a certain standard in life. Curmudgeonly Keith fell well short.

The there was Wilf Morton. Where to start. He came, he bantered with Blanche, he left. With his scary teeth and a dodgy past, we were left none-the-wiser as to what he was all about, where he went and why he was never mentioned again. Poor Wilf was probably embarrassed by his shambolic family and is still hiding out in the loft.

There are probably more. Other long-forgotten elder statesmen of the Street who passed through, failing to leave a mark. Maybe Barry Connor will be different. Corrie needs a older chap with a twinkle in his eye. Watch out Audrey!