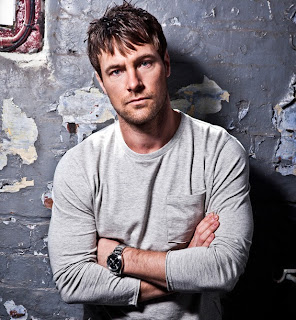 (This post was originally posted by Scott Willison on the Coronation Street Blog in September 2013.)

The news that Mark Baylis (Rob Donovan) had been longlisted for Best Newcomer at the National Television Awards was met with befuddlement by many viewers.  But he's awful! they said.  His character is so dull! (edited: Personally, this editor likes him and he's coming to Halifax!!!)

First of all, it's the National Television Awards, not the Academy Awards.  In terms of prestige these are just above the British Association of Double Glazing Salesman's Annual Dinner Dance and Raffle.  Last year, Mrs Brown's Boys won Best Sitcom, and Best Factual went to Paul O'Grady: For the Love of Dogs.  There used to be a category for "Star Travel Documentary".  I don't think Julia Roberts is sat at home crossing her fingers for an invite.

Secondly, he has to be nominated because the producers need to make the casual viewers aware of the Street's newest "bad boy".  Look! they say. We have an attractive male character in his late 20s/early 30s with dark brown hair and a bit of a sneer.  That's what you want to see!  He sometimes takes his shirt off, too!

Problem is, viewers have been stung by this before.  Over the past few years a parade of dodgy, handsome rogues have marched their way through Underworld.  Half of them went out in a body bag, and the other half disappeared without anyone really caring. 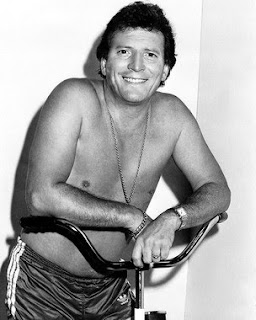 This is all Mike Baldwin's fault, of course.  The original and best, Mike swaggered onto the Street in 1976, permatanned, hair oiled, denim jacket majestically open so that we could fully appreciate his raw sexual magnificence.  He strode onto the cobbles and sent the female residents swooning.  He was a Cockney, of course; his powerful charisma was so alien to Weatherfield it had to have come from somewhere exotic, like That London.

For twenty five years, Baldwin dominated the show's business dealings.  He had his fingers in more pies than Diggory Compton.  Baldwin's Casuals, that dour grey building that churned out some of the most miserable looking outfits you've ever seen.  The fall in popularity of Status Quo lead to him flogging the denim business and having a go at manufacturing.  He had a garage and a limo business.  Finally he decided to combine his two interests - saucy women and money - and set up Underworld, creating the kind of scratchy knickers men buy their wives on Valentine's Day which then get chucked in the back of the drawer after one use. 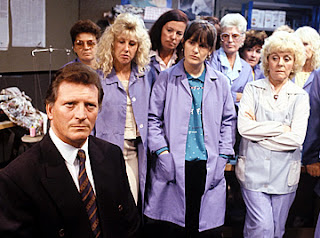 Baldwin loved the ladies; he was so much of an Alpha male the Greek Parliament petitioned to rename the first letter of their alphabet Mike.  Factory girls, barmaids, florists, random dolly birds in hot pants - they all passed through his bedroom, barely ruffling his satin sheets.  He famously carried on with Deirdre behind Ken's back, an affair that is fondly remembered as the last time the subject of Mrs Barlow's sex life didn't make people retch.

This caused a long-standing, deep seated loathing between Barlow and Baldwin that only UN Peacekeepers could pull apart.  Under normal circumstances, we should be on Ken's side: he's the dependable, nice guy, whose wife did the dirty on him.  In reality, it's a bit like that moment in Jurassic Park when you see a tethered goat by the fence.  "Aw, a lovely sweet goat!" is your first thought, but your second thought is, "I hope a T-Rex rips it to pieces."  And then a bloodied leg falls on the roof of the car and we're all happy.

They batted back and forth for years - Baldwin marrying Susan Barlow for seemingly no reason other than it would really annoy Ken, Barlow having an affair with Alma because it would really annoy Mike - until they found a sort of peace over son/grandson Adam and his Horrible Hair.  The two men united to bring up the Scots irritation, and when Mike began suffering from dementia, Ken was - well, if not exactly supportive, he didn't run down the street singing Ding Dong The Witch Is Dead either. 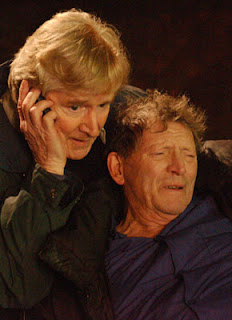 Johnny Briggs' advancing years meant they needed a new character to strut his way around the factory smelling of testosterone, and so the scriptwriters naturally turned to his gene pool for a replacement.  Enter Danny Baldwin, played by a game show host and dragging along an impressionist for a wife.  I can't help thinking that someone misread the instructions.

Bradley Walsh did his best as Danny, but he was never as confident with the "swindling elderly men out of their money" or the "diddling his son's daughter" storylines as he was at "being a lovable chirpy Cockernee, apples and pears, luvaduck".  After a series of shenanigans involving more duplicate wills than a minor public school Danny departed, and the factory fell into the hands of the Connors. 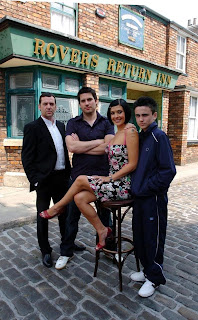 There were two Connor males: Paul (short, dark, brooding) and Liam (tall, dark, brooding).  They brought with them sex appeal and a dodgy background, perfect for the role of factory boss, as apparently "being good at business" isn't good enough.  After Paul died in a series of ridiculously contrived circumstances (let's just say "hooker in the boot" and leave it at that) Liam took up the leading role as factory stud. 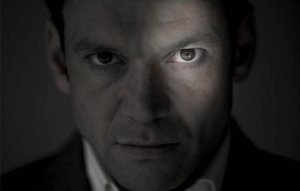 The cause of death was marked down as "Tony Gordon", his replacement in the dark haired chiseled factory owner role.  Tony had bought a share of Underworld - though how much was never clear.  In fact, the fractions of Underworld have baffled Nobel Prize winning economists.  Never is it more obvious that Corrie is written by a bunch of arty farty writers rather than say, Theo Paphitis, than when characters have to talk business.  People just start barking percentages at one another and writing mysterious numbers down on bits of paper and none of it really makes any sense.

Tony owned half, or maybe a third, or maybe thirtenty percent, or something, but his sex appeal was undermined by two facts: (a) his rogue eyeball, making him look like an anaemic Mad-Eye Moody and (b) his fondness for murdering people who got in his way.  Much as ladies like a bad boy, an actual psychopath is a bit too much, unless you're one of those insane women who get engaged to men on Death Row.  His nuttiness drove Carla away, so she appointed a manager to look after the factory in her absence.

Enter Luke Strong.  Right from his name downwards, Luke was as Generic Cocky Businessman as it is possible to get.  I can't believe that name got through the Script Editor - what was wrong with Tom Masculine?  Roger Sexsymbol?  Butch McStud?  The porn star-monikered character strode into the factory and attempted to make some kind of impression on our screens, but he was outmanouvred and outclassed at almost every turn.  It didn't help that he was played by Vince from Queer as Folk, so his raw sex appeal was undermined by the memory of him mouthing along to The Pyramids of Mars.  Luke eventually left after out-thinking Rosie Webster, which is a moment of Machiavellian genius just above persuading Peter Barlow to have "one more drink". 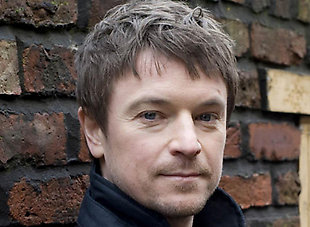 He was replaced by another dark and brooding businessman, Frank Foster, whose sex appeal was rather more "specialist".  After he tried molesting Maria, it was difficult to believe the scriptwriters would continue to make him the roving Romeo of the Street; it just wasn't going to happen.  And if the casting director thought we could forget Luke was really Vince, we definitely weren't going to forget that Frank was the trick in Queer as Folk who gave heroin to Declan from Emmerdale then ran off when he overdosed.  Basically he was a bad 'un, as he proved when he subsequently raped Carla.  Eventually he was murdered by Gwen Taylor.  The saddest part of his death was the thought that if Gwen had done that to Keith Barron in 1982 we'd have been spared three series of Duty Free. 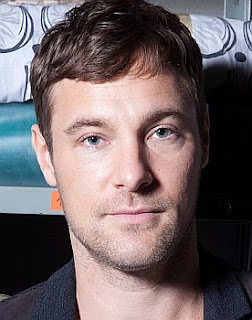 Now Underworld was being run by two women, Carla and Michelle, which left the factory girls nowhere to direct their lustful urges.  It was either Sean, which would be a waste of everyone's time, or Kirk.  Let's just say Kirk is "an acquired taste" and leave it at that, shall we?  The writers scraped around their barrel of characters and came up with Rob, Carla's hitherto unmet brother who, despite being just out of prison, had a bafflingly fine instinct for business.  In fact he was so good you wondered why he bothered with the armed robbery in the first place, as he clearly should have been on The Apprentice.  Though he's extremely pretty, Rob is utterly charmless - the fact that he's hooked up with Tracy Barlow and yet we feel sorry for her should be a clue.  It's a flaw in Carla's otherwise impeccable sheen that she bothers paying him any attention at all.

I expect Rob will continue to strut around the Street for a while longer, wearing jeans that are one size too small and winking for no apparent reason.  Then he'll be leave, and the producers will have to find someone to replace him.  I'm going to go out on a limb and guess he'll be tall, dark and brooding.

Hilarious, thank you! A couple of good laughs after a 12 hour day at work. Now to watch my DVR'd Corrie.