Stella gave Jason and Eva her blessing but her heart isn't really in it at first. Ah well, let everyone have a shout and then just get on with it. Stella's decided to sell up. Gloria will get her share back so she's not got anything to lose there. Norris of course, had to put his two pennies in but was on the spot to find out about the pub sale and he couldn't wait to run around the neighbourhood broadcasting the fact.  The sign is up and now Stella must wait for an offer. Well after hearing about the bust up between Michelle and Carla, Steve has decided to buy it back!

Hayley isn't giving up and found another instructor with full disclosure. This time poor Hayley saw a different side of Roy and I think her mirth may even have leaked into Roy who cracked a smile. Ah,  Christian is coming to visit! And he did after standing her up first. Roy's really trying to protect her, worried that Christian might be as nasty as last time. I didn't think he would be. He looked very contrite when Roy warned him. He seemed uncomfortable but he really did try hard. Nobody really knew what to say so the solution was to go to the pub and it went downhill from there. I guess that's as much closure as they're going to get. As for Christian calling Hayley a rubbish Dad... how would he know? She didn't even know he existed until he was grown. And don't give me bollocks about him not having a chance to get his head round his father being a woman because he's had years. He just chose to put it away and not think about it at all rather than get to know her.

Now that Nick's waking up, David (and Kylie both) are bricking it! What does he remember? David's using Tina as a dumping ground for all his fears. Meanwhile he's organized a nice meal for Kylie to cheer her up but Kylie doesn't seem too keen on the christening. I am surprised David is even thinking of it though I suppose he figures it will further cement them as a family for when it all blows up in his face. Poor Kylie, had to deal with the lady vicar herself. She was lovely but Kylie was very uncomfortable. 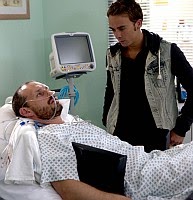 Nick is waking up but he's still taking very baby steps. David tries the tactic  of trying subliminal whispering, trying to implant his version of the story while Nick sleeps. It made Leanne suspicious but David covered. And at the end of the day, all that stress and worry David was holding in overflowed at Kylie's expense. Wow that was quite nasty wasn't it? Not in the usual David way but in a realistic grown up sort of way.

Kylie and David are arguing and I don't blame Kylie for being narky at David after how he railed at her the other day. He did apologize but I think it's going to take a lot more sucking up. Gail takes David's side of course. Everyone is excited because Nick is really making more signs of coming around. Gail is not as enthusiastic about Nick's progress as Leanne is. A mother's heart is breaking, you can understand that. Very realistic portrayal, I think. David is looking pretty pale when he heard Nick was speaking. He just wants to run away.

Meanwhile Nick does seem to have some awareness. (You'd think they'd be shaving him, wouldn't you?) He finally gets a word out that makes sense, "David"

Sounds like Michelle's just giving up now that she realizes she's not going to rise up the corporate ladder like she thought and she's going to make every one suffer. I don't for one minute think Peter did his sums wrong but maybe it was nerves. The meeting was a bit of a disaster but they managed to save the order in the end. Peter thinks Michelle was undermining him on purpose. Was she? Doesn't matter. She quit and now she's moaning and she's not as highly employable as she thinks. Getting a job back in the pub is like going backwards but it's money! 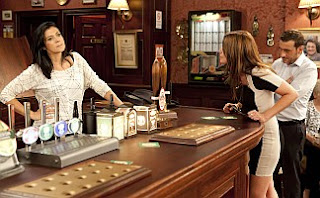 Peter is scrambling to do all the office work while Michelle is gone and Carla isn't back. Beth gossiping over his shoulder isn't helping. Michelle's rant at Carla was a bit much but some of it was true, I think. Except for the bit about Michelle always being there for Carla since they were kids. From when they were first on the show, they didn't like or trust each other very much did they? Peter says he's getting on ok at the factory and he's learning. But is it really worth losing your best friend over? Carla doesn't look quite so sure.

It didn't take long for Michelle and Carla to make peace. So much for that feud.  Michelle was working towards being more of a management type employee so yes, she does feel unappreciated being pushed back to PA, the job she was hired for. They need another young person like Rosie Webster! Maybe Sophie? Michelle finds the pub a step backwards and Steve is still keeping the purchase of the pub a secret. I suppose if she gets to own/run the pub together with him, she'll be the boss and that might make her happier.

The down side to being a business owner is chasing down people that owe you money. Owen is having to do it now. Why shouldn't Katy work in the builders' yard office? Tina never had to chase down debts and chivvy workers. Why should Katy?  Owen took a lot of persuading to let Katy work in the yard. Being a mother *is* her job? Seriously? Has he completely missed the whole feminist revolution? Seems so. Katy didn't take No for an answer. Part time indeed. I'm sure the hours are flexible as long as the work gets done. She found it harder than she expected but it's his fault for sloppy practices.

Faye is firmly entrenched in teenhood even if she's only 11. That phone is going to have to be surgically removed from her hand! Ryan continues to be a waste of space. Was he ever anything else? Ryan can't be any more feckless than Steve was at that age. Steve's pep talk had an effect but not the one Michelle had hoped for. Off the sofa and onto a plane to Ibiza.