Corrie A-Z: S is for the Seventies 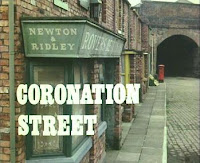 Bookended by strikes, it could be said that this decade was the most testing for Coronation Street in its history. It was the first time that the producers experienced that the cast wasn’t invincible. They had experienced departures in the 1960s, but not the loss of big characters. During the 1970s, they lost many key characters through death or departures while other characters were absent due to ill health. Producers had relied on the same characters more or less since the show’s inception, and so during the 1970s had to invest in new characters to secure its future.

In 1970, the show experienced the first death of a cast member. Arthur Leslie, who had played publican Jack Walker since the beginning, died suddenly and Jack was the first character to be written out due to the death of the actor. Doris Speed, who played his wife Annie, considered leaving but decided to stay put and Annie soldiered on behind the bar with barmaids Betty Turpin and Bet Lynch. The same year Anne Reid, who played Valerie Barlow, also decided to leave. Valerie was electrocuted by a faulty hairdryer in 1971 and over 18 million watched her death and her funeral.

In 1973-4, Coronation Street reached crisis point. The ratings hit a new low: 8 million (about the same ratings we get these days) in early 1973 while Pat Phoenix, who played central and popular character Elsie Tanner, quit the serial without notice later that year. To add fuel to the fire, Violet Carson, who played as-central Ena Sharples, suffered a stroke and was absent for most of 1974 and didn’t appear on a regular basis for the rest of her time on the show. Doris Speed also took a couple of months sabbatical leave. During this time as well, ITV’s other soap Crossroads was also gaining success with its Thatcheresque lead character Meg Richardson very popular. Many saw Meg as a replacement to Elsie as she was also a redhead. The sudden departures of Elsie and Ena and the absence of Annie led producers to develop characters who had before been in the background. Characters like Bet Lynch, Rita Littlewood, Deirdre Hunt, Mavis Riley and Gail Potter were built up in this period. As we know, these characters would be in the show for years to come – while some are still there! 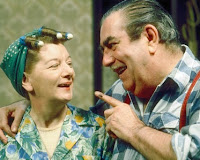 Humour of course had been a vital ingredient in the success of the street very early on. By the early 1970s, the humour was few and far between. In 1976, new producer Bill Podmore decided to re-introduce the humour back into the show involving Stan and Hilda Ogden, Eddie Yeats, Mavis Riley and Fred Gee. As well as this, 1976 was also a positive year for the show. Pat Phoenix returned to the show after a three year absence and Violet Carson also returned on a more regular basis – 42 appearances compared to the 13 she appeared in 1974. But the same year the show lost another of its stalwarts. Margot Bryant, who played original character Minnie Caldwell, had begun to suffer memory loss and had to be written out in April 1976. But the late 1970s was a period where the old guard and the newcomers were brought together with various relationships being formed between characters of different ages: Elsie took in Gail Potter and Suzie Birchall as lodgers; Eddie Yeats became involved with the Ogdens; Mike Baldwin becme the new factory boss; and Annie Walker continued to reign supreme at the Rovers with Bet, Betty and now Fred Gee.

Storylines during the decade consisted of various marriages and romances – Alan Howard and Elsie Tanner, Ernest Bishop and Emily Nugent, Billy Walker and Deirdre Hunt, Ray Langton and Deirdre Hunt, Len Fairclough and Rita Littlewood and Mike Baldwin and Bet Lynch and Brian Tilsley and Gail Potter. Others include Betty Turpin revealed as the mother of Gordon Clegg in 1974, the warehouse fire in 1975, the murder of Ernie Bishop in 1978, and a lorry crashing into the Rovers in 1979.

As for competition, the 1970s was a quiet decade for the show. Both the other two soaps of the 1970s, Crossroads and Emmerdale Farm, weren’t a competition to Corrie (although Crossroads did grow in popularity between 1973 and 1975) and were, as someone said, the little boats floating alongside the huge ship. It would be in the 1980s that Corrie’s position as top soap would be threatened.

Do you have a favourite storyline from the 1970s? Did you start watching Corrie in the 1970s?

What’s your favourite moment from the 1970s?