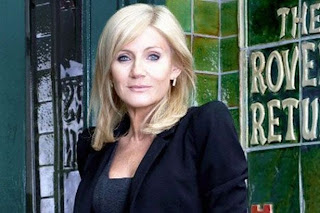 (This post was originally posted by Clinkers (David) on the Coronation Street Blog in August 2013.)

Well the bunting and streamers appear to be on order as a nation celebrates (possibly) the exit of St Ella of the Beige from t'Rovers back room.

Personally, I always feel a bit sad when a character seems not to have worked out - well, other than Tracy McBarlow. An actor has to work with whatever is given to them and in the case of Stella, Michelle Collins found herself shoe-horned into far too many irrelevant scenes. Her involvement in the storyline centred on Betty's death  left most people gasping in incredulity.

The departure of Stella, if that is the case, should have paved the way for something new, something exciting or perhaps a bold piece of casting for a very different landlord or landlady. Instead, we get Liz MacDonald. Again.

Judging by some comments, anyone would think we are about to experience the Second Coming. In Liz's case, it's the umpteenth coming. The woman is a like a boomerang in a basque. No matter how far we throw her . . . Anyway, we will get another chance to see her clattering across the cobbles, dressed in some garish effort. She's more Ronald McDonald than Liz McDonald. 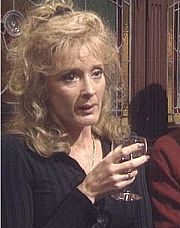 Will she add anything to life in the Street? It's doubtful. There will be the usual tired romance with someone inappropriate (Norris? Sean?) There will interminable scenes in the pub as she hollers and splutters like some angry Tweety Pie. A few red wine and fag ash scenes with Deirdre, all reminiscent of Marg Simpson's scary twin sisters. Several long-winded visits to Andy in Spain who will require 'looking after' following yet another accident. Close-ups of that rotten zig-zag necklace. Then she will disappear into the night yet again.

Arguably, Liz McDonald is no Corrie 'great'. At best she was a questionable mother and an average barmaid. My heart doesn't leap at the thought of her returning. She will never have the gravitas of Annie Walker or the popular touch of Bet Lynch - and that's a problem. If she comes back wiser, calmer and more balanced then hurrah. What the Street needs now is a woman of a certain age with a bit of common sense who is both grounded and happy with herself. It doesn't need some shrieking fishwife who looks like a half-baked drag queen.

Should the past be left where it is? Cameos from past characters are always welcome - we would probably all like to see one or two more. Corrie, like life, should move on rather than revisiting past glories. Or even past Glorias. Are we happy for old faces to return or should we leave them safely anchored in yesteryear?