(This post was originally posted by Stevie Dawson on the Coronation Street Blog in October 2013.)

Something has either been lost in translation as Britney Spears arrived in London tonight, or Coronation Street has its newest celebrity fan: 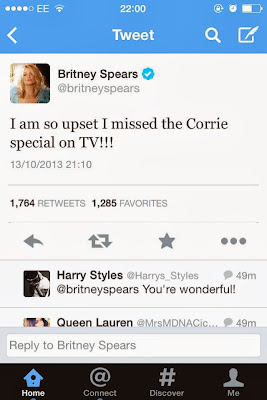 Thankfully, all was made clear by Corrie star Charlie Condou on Twitter, who later posted: "she probably meant the Cory Monteith Glee special :-( "

If that's the case, Ms Spears should give Corrie a try anyway, especially after tonight's fantastic hour long special, don't you agree? The incident certainly got Twitter talking...

Email ThisBlogThis!Share to TwitterShare to FacebookShare to Pinterest
Labels: celebrities