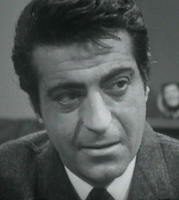 How many of you know who was Miklos Zadic? And how many remember him? I certainly don’t – he appeared 23 years before I was born!

Zadic, along with Jimmy Gibson, was responsible for overseeing the demolition of the Mission and Elliston’s Raincoat Factory in early 1968. The demolitions went smoothly apart from when the Barlow twins wandered into the site before the bulldozers moved in to demolish the factory. Miklos halted the machines and helped Ken to carry them out safely.

Miklos Zadic hailed from Hungary and when he entered the Rovers, he caught the eye of many of the street’s womenfolk – mainly Lucille Hewitt. However it was with another woman that Miklos would be associated with and that woman was, surprisingly, spinster Miss Emily Nugent. They’d been set up on a date by Emily’s pals Val and Irma Barlow. An unlikely pairing, they hit it off. Miklos was passionate while Emily was more conservative and didn’t believe in sex before marriage. After unsuccessfully leading Emily into bed, he decided to respect her beliefs and distanced himself from her. As the demolition had ended, he planned a transfer to Newcastle but planned to holiday in Scotland first. He asked Emily to join him and she accepted, knowing they’d have sex. Emily returned alone (Miklos had gone to Newcastle), a virgin no more and had no regrets. She later moved into the Rovers with the Walkers.

As well as his romance with Emily, Miklos’ other storyline included being accused of stealing Albert Tatlock’s coin collection. Oh, how Corrie’s crimes have changed since then! Albert had shown Miklos the collection only for Albert’s house to be burgled soon after. It was later revealed that a worker from the building site was responsible.

Miklos Zadic was played by Greek Cypriot Paul Stassino, born in 1932. He moved to the UK in 1952 and entered RADA. His credits included Thunderball (1965) and The Saint. He returned to Cyprus in the 1970s and acted and directed in the theatres there. He stayed in Cyprus and retired there and died in 2012 in Limassol.

Sadly, the possibility of Miklos visiting Emily in the future is very unlikely. And I always thought it’d be nice that she’d open the door and find him on the doorstep. He’d sure put Norris’ nose out of joint!
And there you are – the end of our A-Z feature. I hope you’ve enjoyed reading the posts and voting in the polls as much as I enjoyed researching and writing them.
Stay tuned for my next project in the next few weeks.