Corrie A-Z: W is for Weddings

Weddings are popular wherever they are – be it at your local church or if they’re royal weddings like Price Albert of Monaco and Grace Kelly, Charles and Di or Wills and Kate. And soap weddings, and Corrie weddings in particular, are no different.
The first Corrie wedding was Jack and Annie Walker’s daughter Joan marrying Gordon Davies in March 1961, four months after the show first aired. But Gordon and Joan weren’t regulars, so the first regulars to marry were Harry Hewitt and Concepta Riley who married in October that year. 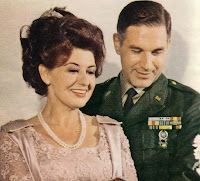 During the 1960s, there were seven other weddings – the biggest being Elsie Tanner’s wedding to old flame Steve Tanner (writers were determined to keep Elsie’s surname!). This was the first wedding to show the actual wedding ceremony. Previous weddings had only shown the bride and groom leaving the church and the reception. This wedding garnered huge press publicity and was dubbed ‘Wedding of the Year’ in the TV Times. The wedding episode from September 1967 is the second most repeated episode in Corrie’s history – behind the first episode. But the wedding day was tinged with sadness due to the death of Harry Hewitt when he was crushed by a van. Do you remember watching the wedding?
Elsie was also the first bride of the 1970s – her third wedding to Alan Howard occurred in July 1970 and was the first Corrie wedding in colour. There were also seven other weddings during the 1970s (although Ken Barlow and Janet Reid’s wedding in 1973 was unseen). It was the wedding of Len Fairclough and Rita Littlewood in April 1977 that was the most watched episode of Corrie during the 1970s and signalled the beginning of a golden era for the soap after a slump in the early 1970s. 20.9 million watched the episode. Do you remember watching that wedding? 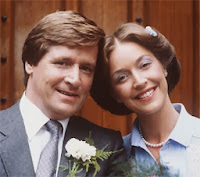 Emily Bishop was the first bride of the 1980s – marrying bigamist Arnold Swain in September 1980. Viewers had seen Emily marry for the first time eight years previously to Ernest Bishop – the most watched episode of 1972. It seems that the wedding of the decade and indeed one of Corrie’s legendary weddings occurred in July 1981 when Ken Barlow married Deirdre Langton. What brought much publicity to the wedding was the fact that it occurred two days before the wedding of Prince Charles and Lady Diana Spencer – the biggest royal wedding to date. Also, both Ken and Deirdre were a popular couple and still are. Another big wedding of the 1980s was when Mike Baldwin married Susan Barlow. As well as the 23 year age gap, the other big problem was the rivalry between Mike and Susan’s dad Ken. Ken’s decision to walk his daughter down the aisle at the last minute brought much dramatic effect which attracted over 18 million viewers. The marriage lasted a year. In 1987, we saw Bet Lynch finally marry. But not to her usual ‘type’. Bumbling and tight fisted Alec Gilroy was an unlikely partner to Bet and many viewers protested outside the church where they filmed the wedding. The wedding went ahead and the Gilroys became one of those classic Corrie couples. While viewers and Bet’s friends like Betty and Rita were sceptical of the partnership, it lasted for five years.
The 1990s saw twenty weddings (although not all onscreen). The biggest weddings of the decade include Martin Platt and Gail Tilsley in November 1991, Reg Holdsworth and Maureen Naylor in January 1994, Curly Watts and Raquel Wolstenhulme in December 1995 and Ashley Peacock and Maxine Heavey in September 1999. Although they weren’t legally married, the union of Roy Cropper and Hayley Patterson in April 1999 was hugely popular. They were finally allowed to marry in August 2010. 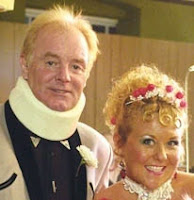 Since the turn of the millennium, there have been thirty weddings – look at the difference from the 60s and 70s!! The biggest weddings include Mike Baldwin and Linda Sykes in September 2000, Richard Hillman and Gail Platt in July 2002, Steve and Karen McDonald in February 2004, Dev Alahan and Sunita Parekh in October 2004, Ashley Peacock and Claire Casey on Christmas Day 2004, Ken Barlow and Deirdre Rachid in April 2005 (a day before Prince Charles married Camilla Parker-Bowles), Les Battersby and Cilla Brown in November 2005, Liam Connor and Maria Sutherland in February 2008, Steve McDonald and Becky Granger in August 2009 and Dennis Tanner and Rita Sullivan in June 2012.