It's hard to imagine Hayley leaving Roy even for a few days. I wonder which room in the elastic-walled Number 9 Hayley slept in if the children are sharing one bedroom and Fiz and Tyrone have the other. It didn't look like she slept on a sofa. Meanwhile, Roy is bereft. It was a good idea for Sally to talk to him, though even if her situation was a bit different but I did wonder why they had their little talk in the cafe, not in the flat though they did get there in the end. Lovely little scenes.

But Hayley is ill and the makeup job was great! She looked white as a sheet, almost grey! Roy now feels temendously guilty for rowing with Hayley. Hayley's slowly recovering from the infection but neither of them is telling Fiz what the row was about. Poor Fiz can't understand and Hayley isn't willing to open up. I don't think Roy will ever understand and is determined to avoid the topic. She's going back home when she gets out of hospital but the issue is still there, most definitely. That's going to be a big chasm between she and Roy.

Gail and Stella are on the same side for once and they're promising to stay out of their children's current life crises. In a pig's eye, likely! They're all pulling together to keep the Bistro going while Nick can't work and Leanne scarpered. Fair point, David could very well be pretending. He lies so well. He's not of course, he's just sorry he got caught and lost everything.  David did point out that he was thrown out of his own house but he's got a very shaky case there.

Meanwhile, back in the doghouse, David is sleeping with a mate  somewhere and Tina took pity. She offered him a place to stay which apparently ticked off Tommy so much he walked out after Tina mentioned to David that they'd been having troubles lately.  That's unfortunatly contrived but necessary as the actor was sacked. I won't miss him, never found him very interesting, just a whiny, immature child. David sleeping under Tina's roof isn't going to help Kylie's jealousy, either. Now with Tommy's departure, that leaves Tyrone in the lurch as well. Tommy's gone, Tina seems to be making friends with a sympathetic Peter. Really though, I think the reconciliation after the baby stuff was always a bit less than "love's  young dream".

Fiz mentioned a shop steward. They aren't unionized as far as I remember. Beth wants discounted knickers. I would think they could get cheap seconds. Chesney has lost all his stock to a breakin. Apparently the bloke whose lockup he's using did keep up his insurance but that can take time to recover and restock. Chesney now has no income and won't get his stock back because the owner of the lockup didn't lock it up! Prime storyline fodder for Dev to hire Chesney to run the kebab shop. Finally a proper job with a regular dependable income, at least. Dev has a reliable worker there, at least.  Michelle is off to Ireland to engineer her parents' reconciliation. She may be some time! If i was her mother, i wouldn't be too keen.  Rob might threaten not to put any more business Tyrone's way but it's too convenient not to.

Audrey must be back in her house again if Rita wondered if she'd taken David in. Dennis ended up confiding in Tina about the ring. It is still baffling why he has no money when he's got a pension and a little cash from his part time job. The payroll from the job is probably what tweaked the council to his whereabouts. Tina's stash of baby cash comes in handy. I guess she didn't give all of it to Tommy. Yes, the engagement ring used to be his mother's but he gave it to Rita so it's hers now. He had no right to pawn it.  It is all contrived to put her at war with Tracy and in Peter's sympathies. 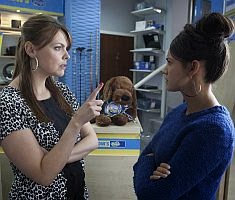 Tracy was vile as always. I do think Tina could take her on and put up a better fight. Tracy isn't a scrapper, she's verbally abusive. He'd had to buy it back for a lot more than he sold it with Tracy rubbing their noses in it. She started right in on Tina in the pub, totally uncalled for so really, she's waving the red flag at the bull and even if it seems that Tina is instigating, Tracy is doing her share.


Cracks in the fabric between Rob and Tracy and he's right. You can't treat the customers like that and he certainly disapproved of her outing Dennis.  Yet, she snogs him and he's all loved up again. Tracy didn't have to publically humiliate Dennis and make sure Rita knew the whole story but you knew she would. Rita really dug the knife in, surmising Norris was right about Dennis being a gold digger. How would you figure that? Rita was far too hard on Dennis. She should have let him owe Tina the money rather than take on the debt and him to pay her back. She also more or less sent him to bed without his supper, like disciplining a child. Now he really feels like dirt! Tina was in the doghouse too but the next time Rita saw her she was all smiles.

Tracy did warrant a warning from Tina. She did treat Dennis and Rita shoddily, nothing to do with charging more to buy the ring back. She further annoyed Rob by closing up at dinnertime and she wasted no time pulling Tina's chain about Tommy leaving but Tina at least managed to come back strong, exposing Tracy's one night stand with David. Her apology to Rita was pretty fake, and only served stick the knife in Tina's back again over Tommy. Peter's right about Tracy, she plays dirty. She might lost a physical fight but she'd retaliate. At least Tina has Peter's sympathy. Sparks, anyone?

In fact, if it weren't for Tracy probably having Tina in jail for assault, I'd really like to see the two of them in an all out fight because I still think Tina would wipe the cobbles with Tracy. All this bickering and trading of insults was probably fun for the writers to dream up but it started to get highly tedious. Tina stashed knickers in Rob's car. That was childish and completely obvious and clearly Tracy does trust Rob. Still, Tina took the opportunity to rattle Tracy's cage uncalled for so she did deserve the insults she got back about her Dad. It's descended into mayhem and it's boring and tedious and it's only serving to push Tina into Peter's radar, really. Peter might say he's got Tina's back but he didn't do much for sticking up for her with Tracy.

I do enjoy it when people manage to get the better of Tracy like when Liz pointed out she barely sees Amy. Tracy doesn't quite have Sally's sour look down pat but she's working on it. Rita seems to have let Tina out of the doghouse about the ring but is still trying to keep her on the straight and narrow. Will she listen? Will she heck! Well Tina has made an enemy of Tracy but then she's got good company since half the Street are Tracy's enemy too!

I loved the scenes in the pub with Liz, Sally, Beth and Sean. Beth thinks she and Liz are two peas in a pod and in some ways she's right. Liz likes challenging and exciting men. Sean and Sally think it's closer to brutes and psychos. Beth agrees with Liz who thinks yes, Kirk certainly is a challenge! LOL! Brilliant!

Cracks in the fabric between Sophie and Jenna too. More and more Tim really is behaving like an ignorant pratt. Sophie is obsessed and Jenna is getting exasperated. Sally seems oblivious but she does want to make friends with Faye who really has no reason to resent her since Sally never took Tim off Anna or anything like that. Tim is getting more and more obvious about being a loser too, it's as if he's only in it for the sex and free meals and that's it. He can't be arsed to make Faye a priority. 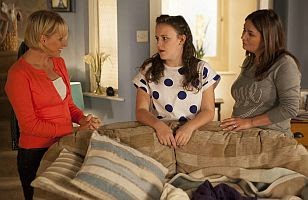 Well, at least Sally put Tim in the doghouse too for standing her up with the movie date, for 5 minutes. Jenna has lost all patience with Sophie's ranting and, it seems, Sophie herself. Sally does seem to realize down deep but in the face of Anna's accusations, she'll get defensive. Tim overheard Sophie's ranting. As if he didn't know already. He says he's not an idiot so he's going to dump Sally though still wonders if he just keeps on behaving badly, Sally will do the dirty work for him. Well, in the end, he doesn't get the chance to dump her because he's taken aback when she wants to finish with him, citing her over-clinginess, blaming herself. That sorts him out and he thinks she will just be a no-strings girl from now on, which is what he wants. You must be new here.

Sophie's not going to be happy about it. I don't blame Sophie for being miffed that Tim is being sloppy around the house. She wasn't being immature about that at least and she can see Tim is a tosser. Don't know why Jenna can't. Sophie also can tell there's problems with Jenna who's finally realized that she and Sophie are just not suited and have less in common than they thought. So that's over. Will we lose Jenna? I hope not, I do like the character, just not with Sophie.

Rob didn't like Tracy closing the shop at lunch but then he did it too, when he took them on a business lunch. Liz isn't keeping much of a reign on Tina and maybe she's talking sense to her but I don't think her words have made much of an impact. Peter moans about a new person in Packing who didn't close one of the boxes. I'm surprised Kirk, usually so vigilant about training newbies, didn't catch that one! Things are going a bit rocky at the Bistro with a tempremental chef. Nick's finding it hard not to get involved.

Back to Brian and Julie and the fostering storyline. I hope Roy had free wifi in the cafe where she was writing the email. Julie's very enthusiastic but it's continually clear that Brian is not. Brian thinks foster kids will be every bit as tiresome as most of his students and Julie doesn't think so. I think she's dead wrong. Most foster kids come from troubled backgrounds and are hard work. Brian's getting fed up with teaching.  Cracks in the facade between these two, as well? He's eyeing up the job ads. Wanna bet he finds a new career and it's not in Weatherfield and she doesn't go with him?

Poor Roy- he just needs to realize that it cant be about him anymore its about Hayley. As for Tracy well shes Tracy and anybody who forgets that is gonna get reminded in an ugly way no doubt. I kind of like the Peter/Tina thing but no sparks please an actual friendship would be nice- Tina should have at least one friend she hasnt slept with!