Corrie A-Z: S is for the Sixties 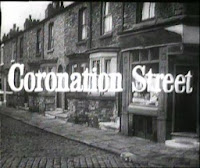 
As we all know, this was the decade that our favourite show began! First airing on the 9th of December 1960, the show was only commissioned for thirteen episodes but viewers were immediately drawn to the serial set in Manchester, despite no critical acclaim. Viewers enjoyed watching the ins and outs of ‘ordinary’ working-class characters, something that hadn’t been portrayed on television before. The show also made use of the Lancashire dialect of ‘eh chuck’ and ‘nowt’ and suddenly another dialect was heard on TV screens apart from the Queen’s English. The serial consiste
d of 21 original characters, which you can read about here.

Storylines in the early years included Ken Barlow battling against his working-class background. Ken was one of the few characters to have gone to university and symbolized the growth of globalization and the decline of communities. His clashes with his dad Frank and Len Fairclough caused tension in the early years of the show’s history. Another early storyline was the rivalry between battleaxe Ena Sharples and street siren Elsie Tanner. They had two memorable showdowns: in 1961 when Elsie accused Ena of sending her a poison pen-letter and in 1965 when Ena, as Elsie’s new landlady, attempted to evict her. Other characters who were involved in storylines during the early 1960s included Jack and Walker, Harry and Concepta Hewitt, Minnie Caldwell, Martha Longhurst, Leonard Swindley, Emily Nugent and Christine Hardman.

In 1964, new producer Tim Aspinall decided that the show needed a shake-up (a precursor to Brian Park if you like) and decided to axe several characters. The biggest casualty was Rovers cleaner Martha Longhurst, who occupied the Rovers snug with fellow OAPs Ena and Minnie. Viewers and cast-members alike protested against the axing of Martha but they were defeated and Martha died of a heart attack in the snug. But while the show lost a popular character, it gained two characters that would become Corrie legends: Stan and Hilda Ogden!
Coronation Street immediately won over the viewers and by March 1961 had reached the No. 1 slot and remained there for the rest of the year. Around 15 million regularly watched the show, which was about three quarters of the audience. By 1964, the programme attracted over 20 million viewers.

For the remainder of the decade, storylines included the marriage of Ken and Valerie Barlow that included the birth of their twins Peter and Susan in 1965 and Valerie being kept hostage by rapist Frank Riley in 1968; the various liaisons of Elsie Tanner that included her wedding to old flame Steve Tanner that was a huge ratings winner in 1967; the train crashing off the viaduct to the street in 1967; the murder of Steve Tanner in 1968; and a coach crash in 1969.
Despite its huge popularity, Coronation Street was criticised by some for portraying an outdated urban working class with many stating that 1960s Corrie portrayed 1950s life. But many viewers stated that many of the scenarios on the terraced street, like mending a bike in front of the fire, mirrored the lives of many British communities. Critics called for the show to reflect the rebellious 1960s with stories of homosexuality and drugs but the show dropped them in fear of upsetting viewers.
Did you start watching Corrie in the 1960s? Did you watch the first episode or the early episodes?
What’s your favourite moment from the 1960s? Vote in the poll below. And if you haven't yet, you can vote for your favourite Corrie moment from the 1970s here.