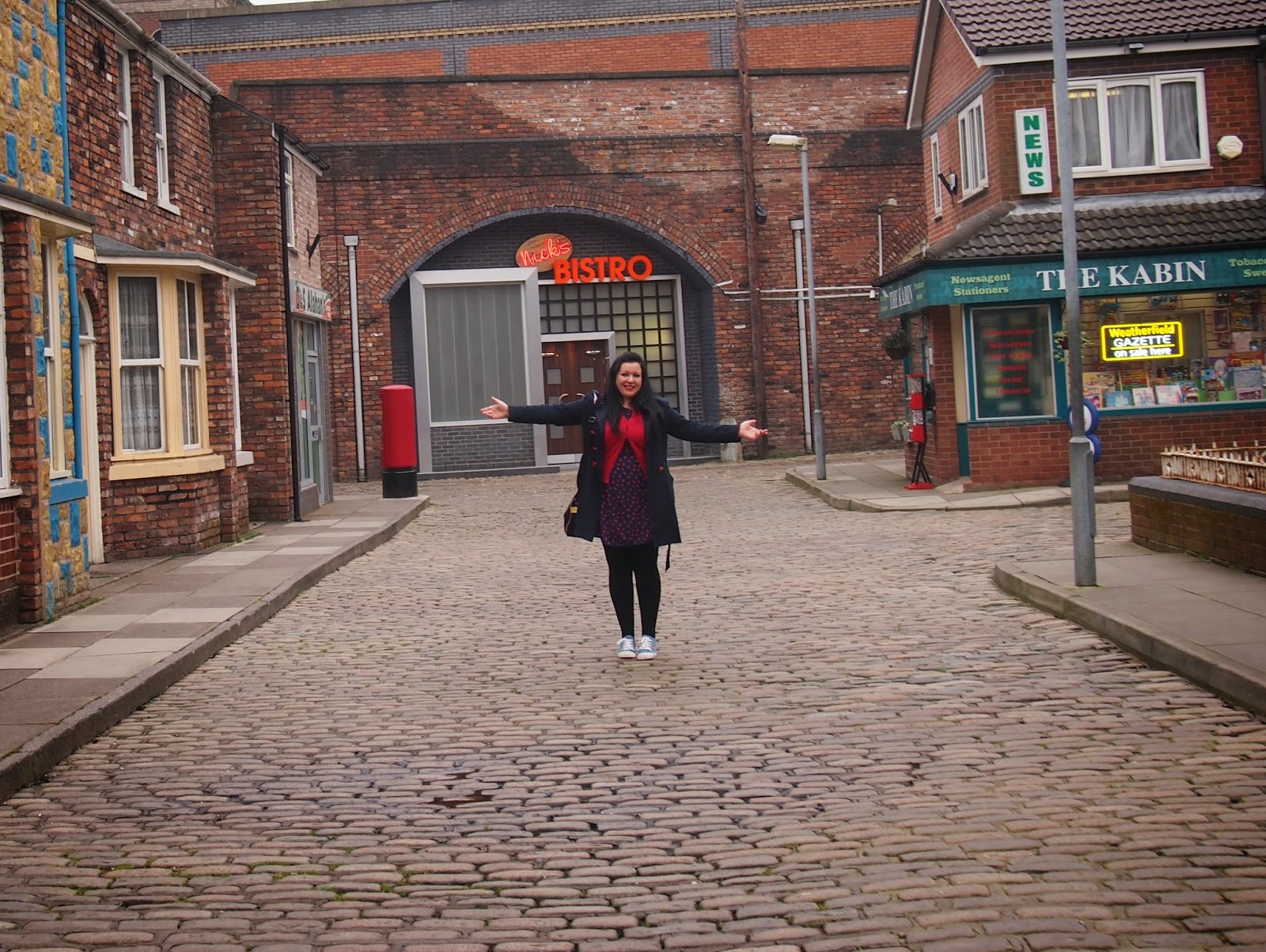 (This post was originally posted by Emma Hynes on the Coronation Street Blog in April 2014.)

An exciting prospect lay ahead of me on Thursday the 3rd of April as I flew from Dublin to Manchester  to attend an exclusive preview of the Coronation Street Tour which opens to the public this Saturday, 5 April until 4 October.

Up in the clouds, I pondered what it would be like to finally walk down the street that has formed part of my life, and which I have held so dear, for so long. I wondered how I would feel, what I would see, and how I would manage to contain myself until it came time for the tour.

Once I got there, I received a very warm welcome from Martin who walked me through to the start of the tour. Many a fateful encounter involves strangers meeting beneath a clock, and this was where I was to meet my guide at 16.25.

But first, a coffee; and not just any old coffee, one with a cardboard Coronation Street holder; a lovely detail. The café bears the hallmarks of a studio with black curtains and the semblance of an overhead lighting rig. There is a wonderful outdoor area with a beautiful garden where I can envisage Corrie fans talking about their experiences throughout the summer.

As the time came for the tour to begin, our guide Liz got the group sufficiently excited before we entered the building. The first stop was the Green Room, a space for the actors to take time out from playing the characters we know and love. A mark of their former presence came in the form of pigeonholes with their names attached, and the sheer volume of them gave a sense of just how big the cast is. We then entered the “Corridor of Stars” where dressing rooms were interspersed with some wonderful photographs spanning the years, and autographed photographs were tacked to some closed doors. 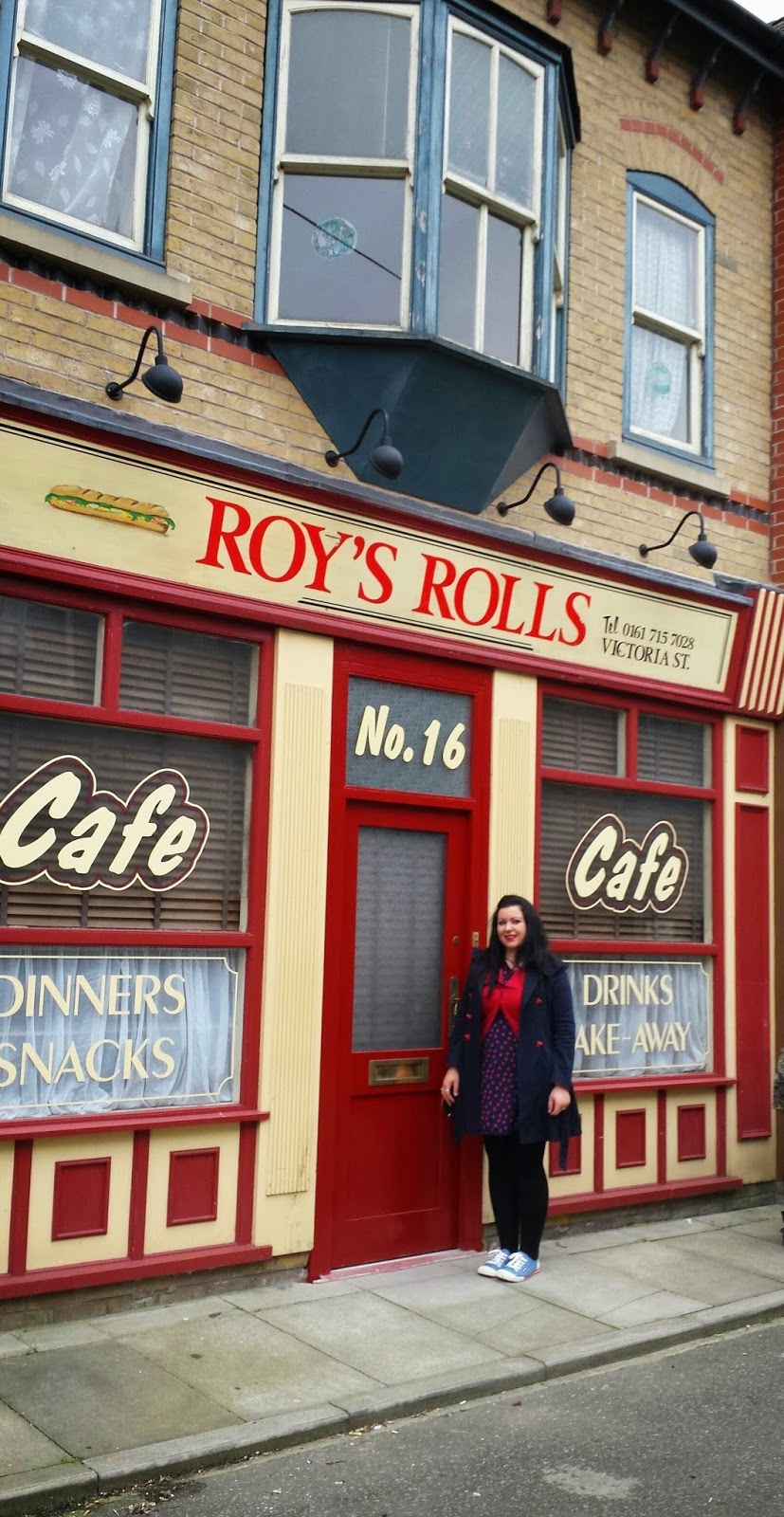 Next stop was the costume and make-up room, and without a doubt one of my highlights. If pigeonholes and empty dressing rooms whispered of the ghosts of Corrie past, seeing their actual clothes on racks was spinetingling.

From Carla’s wedding gown to Julie’s beautiful 1950s style cupcake dress, they were a delight to behold. However, as I scanned the rows of clothing, I was struck by one selection in particular; a number of Jack Duckworth’s polo shirts. It was genuinely emotional to gaze upon them, hung together, literally the fabric of a thousand tales of joy and pain, of hilarity and heartache, lived out by the wonderful and irreplaceable Bill Tarmey.

I was then guided into a dark room and was presented with another highlight as a montage of Corrie memories played out on a big screen. The compilation of clips was excellent and included scenes I thoroughly enjoyed at the time, and never thought I’d see again. From high drama to high comedy, and from weddings to funerals, it ensured the journey remained an emotional one. The remarkable selection showed Coronation Street at its best, and its thoughtful compilation undoubtedly involved a lot of work which most certainly paid off.

As we moved on to see a selection of sets, I came face to face with Carla’s apartment, the Platt household and surprisingly Martha’s wonderful barge, as well as the former Duckworth household. Seeing the chair in which Vera passed away, and the very set in which Jack and her danced their eternal waltz, was very special indeed.

There isn’t a wanderer who has passed through Coronation Street, whether for a short time or long, that hasn’t taken refuge, revenge, delight, advice, or simply savoured Newton & Ridley’s offerings at the Rovers Return, and us wanderers were no exception.

It was a remarkably surreal experience to be sat in a booth in the famous pub. While visitors can’t take photographs during the indoor part of the tour, a professional photograph is taken of those who wish to stand behind the bar, and this can be purchased at the end.

After glimpsing iconic props such as Deirdre’s famous glasses, Tracy’s murder weapon, and Fred Elliott’s apron, and taking a stroll through the production suite, the time came to step out on to the hallowed cobbles.

We did so via the doors of Nick’s Bistro, and to say the very least, it was a surreal and magical experience, and a definite highlight.

I was at once awed by the fact that I was there, and at the same time, struck by how familiar it felt to me. We had unlimited time to browse the set, which was so authentic it was hard to fathom, from the weather worn house fronts to the advertisements in the window of The Kabin. Visitors are free to take photographs here and the tour guides were only too happy to oblige for those who wished to have one taken together.

While the tour lasted 45 minutes, I spent a considerable amount of additional time wandering about the set. Our tour guide Liz had brought us around with great enthusiasm, and Jonny, another guide whom I met, was similarly enthusiastic, knowledgeable and passionate, and fittingly conscious of the responsibility of guiding people around an iconic place with such a weight of history behind it, and which has such a special and important place in their hearts. 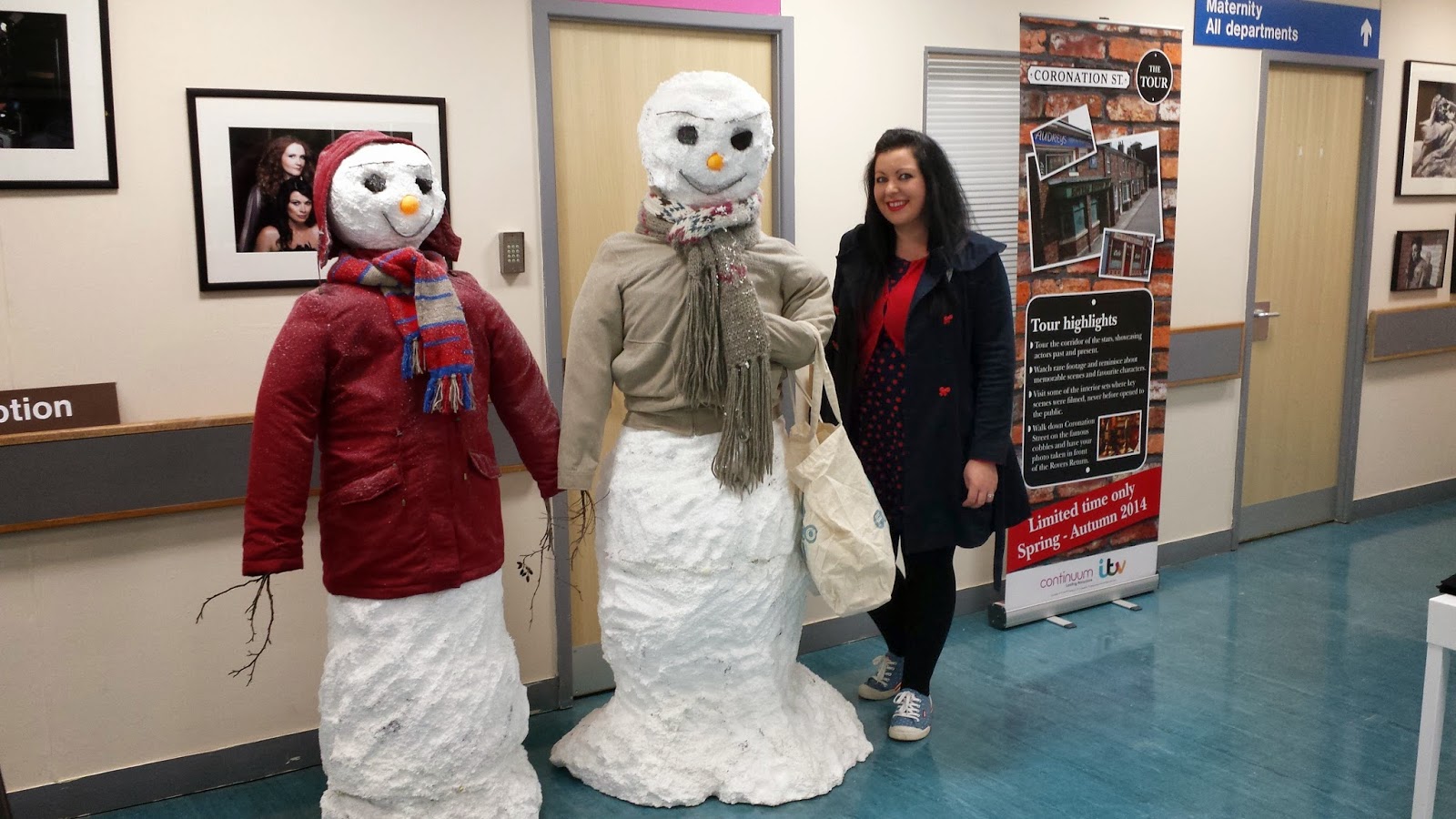 A final surprise was to be found in the medical centre, which contains a souvenir shop, and is where you can collect your Rovers photograph; standing proudly and smilingly were Roy and Hayley’s snowmen; a wonderful treat at the end of what was a fantastic experience. In fact, I genuinely didn’t want to leave and would have been happy to pop into the Rovers for a pint, or Roy’s for a cuppa.


My hope for everyone visiting the Coronation Street Tour this summer is that they enjoy it as much as I did. If I had one piece of advice it would be that while you should of course take advantage of all the photo opportunities the cobbles have to offer, be sure to put the camera away for a few minutes and really absorb your surroundings, as it is most certainly an experience to be savoured.