There's something about Mary... 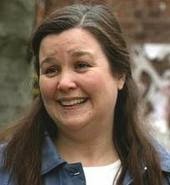 (This post was originally posted by Ruth Owen on the Coronation Street Blog in May 2014.)

I am aware that I may be in the minority, when I praise Mary Taylor as one of my favourite characters  on Coronation Street. From my point of view, she lights up the screen and I am very ready to listen to her rather strange, even rather archaic way of expression.

So, I know some people despise her for cutting off the phone wires and saying, or rather lying to Norris,  that the motor-home would not start. And who can argue with that? She had got Norris on her own in Bronte country and maybe, and nothing is impossible, Mary had a rather distorted view of herself and Norris as a latter-day Cathy and Heathcliff.

Her first words to Hayley, when she was playing chess with Roy, were, 'I just mated your husband - twice.' Mary did develop feelings for Roy but soon realised that any attempt to have a relationship with Roy would be over before it had begun. Everyone, bar Mary knows how devoted he was to Hayley.

Now, having got most of the bad stuff out of the way, let's take a look at the good stuff. There is no doubt at all that Mary came to Dev's and his children's aid just at the point when he and they needed someone, after the death of Sunita. Mary was brilliant. Her 'weirdness' and her odd ways seemed to disappear when the need presented itself. She was cheerful, sensible, very kind, thoughtful, generous of time and spirit. It is worth remembering that Mary herself does not  have a family and though we can never say never, it seems unlikely that she will now. In caring for Dev's children, she didn't once try to smother them with her unfulfilled maternal instinct, rather she was sensitive to the children's and Dv 's needs and never once over-stepped the mark.

Some may complain that Mary did this in order to find her own sublimation; it satisfied a craving in her,  and so fundamentally it was a selfish act. My argument would be that you can say that about almost anyone. Doctors and nurses become who they train to be  because it satisfies them. It also heals the sick, which is a desirable outcome. People's motives are always questionable, but it matters not if the result benefits others.

Though things went a little awry when Mary introduced the theme nights at Roy's Rolls, the number of covers served on those nights were unarguably good. Her help too in The Kabin cannot be disregarded and though she may have thought that she would find a way in to Norris, even when she was rebuffed she continued to work. She has verve, energy, optimism  and a ceaseless interest in life. Not a bad achievement for a woman who as a girl was bullied physically and emotionally. You've got to hand it to her...

While helping to make jam for Hayley, shortly before Hayley's death, Mary takes on the might that is Emily Bishop.  'Emily claims to be a very experienced and much -praised jam maker. I too have links to the upper echelons of preserve production.' Mary tells all those involved that Emily is claiming that the jam-making is not competitive. Mary then says directly to Emily, 'And yet you've elbowed me in the ribs approximately four times.'

Interestingly, and adding depth to her character, Mary is not blind to the faults of her love object. Walking home one evening, back in February, Rob and Tracy were walking towards them and Tracy called out that they should be called Daffy and Donald. This insult spurs Norris on to reveal to Tracy that Rob kissed someone other than Tracy. Tracy becomes furious! At this reaction, Mary states to Norris, 'You have many endearing qualities, you are community-minded and very, very moral. You're a stickler for detail, the way you scrutinise the grammar on everything you read - it's absolutely fastidious.' That all said, she continues; she tells him that he's a 'despicable busy-body who delights in upset and distress and it's a very stupid man who will risk the wrath of Tracy Barlow.'

Just this week at the charity race, Dev could not have had a keener supporter. 'Run Dev, run,' she shouts with real passion. Before the race she is stretching and manipulating his legs in preparation for his run and lists what she has brought to cover all eventualities - Deep Heat, vitamins, glucose drops, ankle supports and a first aid kit. A little over-prepared maybe but you can't fault the enthusiasm.

Finally, to strengthen Mary's case a little further, as the runners are in full swing Mary comments, 'A stirring sight, isn't it?  A sort of lycra-clad microcosm of society, united by a common purpose.'

Yes, Mary - it is. May you brighten our screens for many more episodes!