Corrie tucked away in a Daisy Nook 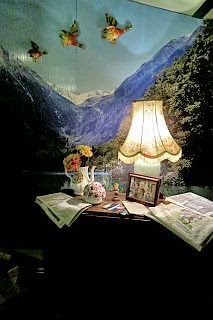 My recent holiday in Manchester included a visit to the newly opened Coronation Street tour. What I hadn't expected was to make a trip to a garden centre for another mini-Corrie tour. Mark Llewellin has been associated with Coronation Street and many of its actors for some years now. I've met Mark several times before and he invited us to visit him at a garden centre of which he's part owner, the Daisy Nook Garden Centre in Failsworth, near Ashton Under Lyne. We could have a cuppa and a nice catch up. Sounds like a plan!

I didn't discover until after the invitation was issued that he has put some of his attic full of Corrie memorabilia on display at the garden centre. He has amassed quite a lot over the years, between things being given to him or things he's bought occasionally from eBay sellers and it was tucked away. Why not show it off and give fans a treat? He's set up a little nook in the Daisy Nook Garden Centre with displays, posters, and artifacts and he has brought in Corrie related merchandise as well at very reasonable prices. Naturally, I couldn't resist that, could I? 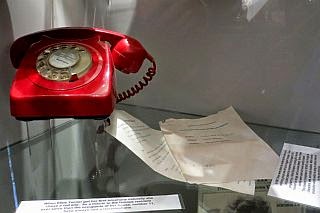 He's got a signed script that belonged to Vicki Binns (Molly Dobbs) from the 50th anniversary tram crash episode as well as a few other signed items and photos. He's got lots of photos and press clippings and he also has a Street backdrop set up with a replica of Maxine's Bench in front for photo opportunities. Some of the props he's got are not the original ones from Granada but are there to tell a story such as a red telephone. Elsie Tanner always had a red phone and the set dressers have made sure there's been a red phone of some type on the set of Number 11 (Eileen Grimshaw's house currently) ever since. Watch for it!

There's a brick from Stan and Hilda Ogden's house from the set that was taken apart in 1982 and there's a little corner with a mural and a trio of one of the sets of ducks that Granada had on it, with a little table, lamp and photos set up beneath it. You can see a small gold handbag that belonged to Maxine Peacock which she had on the night she was killed by Richard Hillman and there's the statue that Tracy Barlow used to wallop Charlie Stubbs (rubber, of course!) There is even a little bar in the corner with Newton and Ridley items and fronted with a table and two chairs. It turns out these are original set pieces that used to "live" in the snug. There's a large photograph on the wall behind the bar and you can see it's the same table.

There are lots of other interesting items in the exhibit and Mark has brought in Corrie merchandise to purchase. He's got mugs, keyrings, magnets, shopping bags, and other items and he stocks a few of the autobiographies that have been recently released as well. He's just waiting for a shipment of Glenda Young's new book on Roy and Hayley, too!

After we had a look around, we went to the lovely cafe where a scrumptious cake and coffee or tea is only 2 pounds! While we were sitting there, a friend of Mark's came over to the table. It was Roy Barraclough who used to play Alec Gilroy! He sat down and we had a nice little chat. Mr. Barraclough was very gracious and pleasant to us! 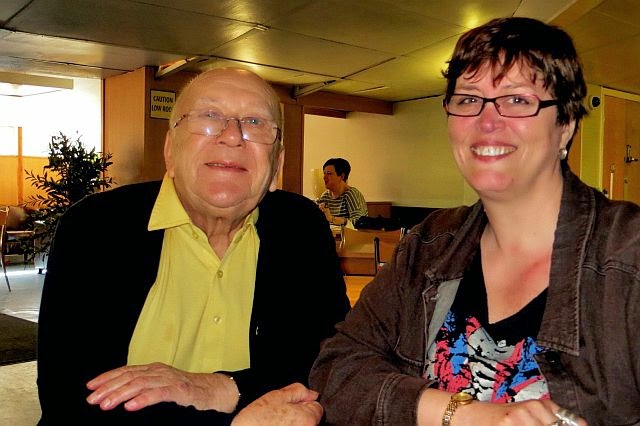 The Daisy Nook Garden Centre also greets a few bus tours of fans through the season. We drove there but you can get there by public transport. You can get there by tram to Ashton under Lyne and then bus 168 or 169 to Daisy Nook. The postcode is M35 9WJ if you have a satnav and a vehicle. It's a lovely garden centre, too and worth a trip out of the city. The area and village there is quite lovely.

You can see a few more photos here.