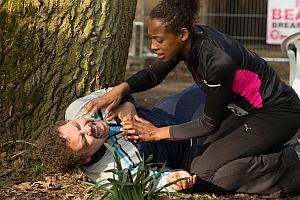 It's the day of the fun run and Steve and Lloyd haven't made peace between them and it only escalates through the day and through the race where they run elbow to elbow, bickering the whole way. They're so close that Lloyd trips over Steve's feet but is convinced Steve tripped him on purpose. It gives Steve the edge to pull ahead but when Lloyd crosses over the finish line, he charges Steve but then collapses with an apparent heart attack!!! Guilty, much, Steve?

Meanwhile, Andrea never did show up at the race, having given a somewhat less than convincing excuse. The next excuse about why she didn't get to the starting line didn't sound too convincing either. Lloyd is forgiving but Jenna isn't. Eileen doesn't seem to trust her either though she's not quite so vocal about it. Lloyd's having a rough week, too. You don't just get over it and in fact it's well known that after a first heart attack the next 24 to 48 hours are the most likely time you'll have another if you're going to and it seems he almost did, though it was angina.

Now Lloyd has to clean up his act. No smoking, sensible drinking, healthy diet. He doesn't look too happy about it. And I wonder how long it will be before Jenna and Andrea wage full out war because the snarky looks and veiled remarks are escalating. He's noticed, too. Jenna's made no bones that she doesn't like Andrea. But there's something about Andrea and she looked quite distressed after that text in hospital.

Steve's offering to give up the booze to help Lloyd. Thanksfully, Lloyd won't take him up on it but it did serve to add to the bond between them when Steve referred to him as a brother. Awwww. 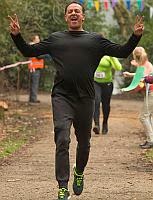 The fun run was great, otherwise. Mary was "training" Dev and was hugely excited and proud when he crossed the finish line. I laughed when they hugged and then pulled apart, looking uncomfortable. Yes. Well. Even Gail ran the 5K!! I am surprised Jason didn't, though. He used to be a runner when he first came to the Street.

Izzy is in charge of the charity money. Izzy is broke and all the bills are outstanding. All that charity cash is tempting. Just to get through to payday, right? But will she get the cash from Gary before the girls want the charity money counting? Make it even worse, The newspaper is setting up a photo op and Izzy clearly looks nervous. They didn't show her taking it but it's clear she did and she's busted. Terrified she'll lose not just her mates but her job. She even sidelined the newspaper person and now Sally's tattled to Carla and Katy's tattled to Gary. Carla didn't sack her yet and i wouldn't. I'd keep her on and take the money out of her wages.

Anna's still pulling away from Owen who's still baffled. She's pretending it's just because she's working two jobs and trying to hold the family together. She can't take the pressure. He isn't convinced that's all it is. We know there's more to it than that. It's guilt. Pure and simple. Katy already knows there's a problem and Izzy has her suspicions that it's to do with Phelan. Anna really is stretched on her last nerve and she's snapping and screaming at everyone!

Owen thinks he has to sell the business and the flat. And with the state Anna's in and all the pressure she's under, he thinks because of him and Gary, he's definitely going to sell up. Jason says he doesn't have any money. I guess he burned through the money he made selling Julie the flat. Spent it on his own freelance business i suppose and on the gym refit. I'd really love to see Jason own the business! He could hire Tim back on too!

It's giving Tony ideas, though. He's making Owen an offer but it isn't a good one. It's an insulting one but Owen might not have a choice. 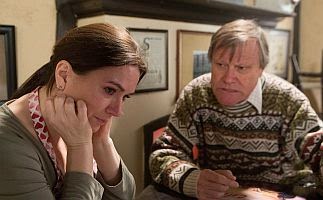 It's Hayley's birthday this week and Roy is having a clear out of all her old brochures and travel magazines and catalogues. Roy is starting to notice that Anna is troubled and it's about more than the defunct appliance. Roy really showed a breakthrough reaching out to Anna as a friend. He even offered a loan but as we all know, it's not really about that, is it? She says she's going to tell Owen. Will she? It won't be easy. And with Owen in a bad mood over Tony's offer and knowing he's probably going to have to take it, and then Izzy arriving in tears,  the timing wasn't right.

Sally feels stunned that Tim left her. Shocked that Tim called her a snob. I don't know how Sean and Julie kept a straight face! Jason thinks Tim should apologize and suck up. Tim isn't sure it would work. Let me tell you, in many cases, sucking up does work. It did in this case. They do still have a lot of feeling for each other. At least it only lasted 10 minutes before they were bickering again about instant mashed potatoes and a broken dish!

Meanwhile, Maddie is having a tougher than usual week, her little brother is leaving today and chances are they won't get to see each other very often. Let's hope t'internet works! Sophie's got a laptop so with any luck, Ben's foster parents will as well. Sally was kind to her, at least and Maddie responded.

Rita might say Dennis staying on her couch is temporary but he's been there a week or more. She looks conflicted. As i said earlier, sucking up often works. Dennis brings flowers and begs her to take him back. I still can't figure out why he's so broke and why he should have a job when he must get a pension. Begging doesn't seem to really do it. He broke their trust and really shattered it and there's not a lot he can do to fix that. Sucking up isn't going to fix this one. She wants him gone but she does admit to Norris she's worried about him and feels like a fool for still loving him. She doesn't see much left for her at her age.

Carla's worried sick about Peter and doesn't know what the future is going to hold for him. And he's home by Friday, fixed or not. Tina seems to be Carla's go-to shoulder these days, ironically. Carla needs to go to Al-Anon for family support, that's what she needs. She finally made Tina realize how serious it is, too, and she thinks she pushed too much stress on Peter. Deirdre's sympathetic to Carla's plight and defended Peter strongly to Rob and now an engagement party is in the works.

Peter is back and says he's learned. Says he's feeling stronger and better but who sticks her face in the mix? That's right, Tina. Adding pressure. Nice one. And now Simon's avoiding him. That's even worse. Peter's feeling very sorry for himself. 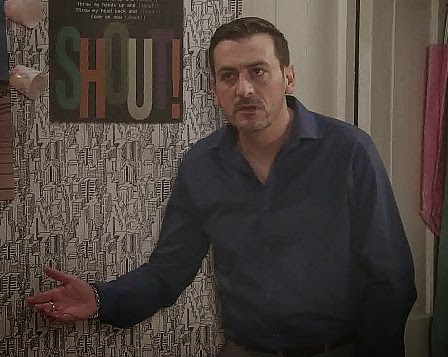 Tina saves the day, again, and brings Simon to him. She keeps finding ways of insinuating herself in his life yet she was worried his crash and burn was her fault for putting extra pressure on him. She's continuing to do exactly that. She can't help herself. Peter's going to have a hard time winning Simon's confidence again.  She finally admitted to Peter that she is not making anymore demands. She's backing off and he needs to get himself well.

Meanwhile, Tracy's being her usual obnoxious self. She doesn't hesitate to rile Tina up whenever she can. Rob tries to be peacemaker but I think down deep he enjoys the conflict some of the time. Just doesn't like it when she goes too far. So much for all Rob's insistence on keeping things above board while he's on parole. Is he not anymore? Because he doesn't seem to have nearly as many doubts working with dodgey Tony. Tracy has decided to have her engagement party in the Rovers after all, just to show off in front of everyone.