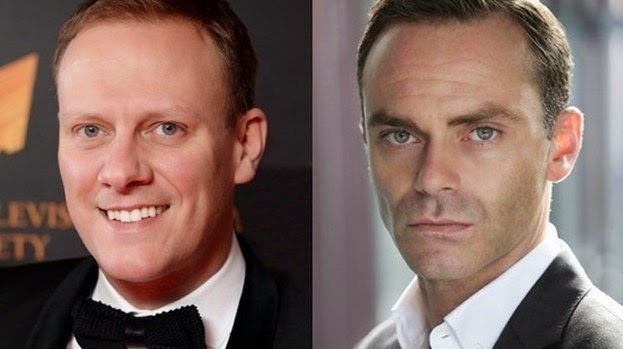 (This post was originally posted by Ruth Owen on the Coronation Street Blog in November 2014.)


Sean Tully has been unlucky in love to say the least, but there will soon be a new man on the scene. The new man is a man of the cloth, a man of God - in short he’s a vicar.

I was privileged to meet Antony Cotton at Media City as he talked about his new storyline. Sean hasn’t had a meaty story for some time, but it really is his turn now.

Asked why Sean is unlucky in love, Antony gave quite an amazing answer. Sean came into Coronation Street, just as Raquel, played by Sarah Lancashire, left. It is Antony’s theory that the writers carried on writing for Raquel, who they seemed to think had metamorphosised into Sean. Never having written for an openly gay man, they basically wrote Sean as Raquel. So, it stands to reason that Sean is always unlucky in love because Raquel was.

Antony knew that he had to hit the ground running when he first appeared on screen. He said that at first, he would have been happy with three months, but then decided that he had to get himself, as an actor, noticed so that he could extend his time on the cobbles. So, 13 years later – well, something went right.

Antony pointed out that Sean has not really had a story for a year now, other than being at The Rovers, the factory and at the Grimshaw’s. As long as he’s there present in the show, he’s happy though. Antony enjoys very much living with the Grimshaw’s and working with Sue Cleaver, Eileen, Bruno Langley, Todd and Ryan Thomas, Jason. He says that the writers have the ‘family voice’ exactly right as they do with the Platts.

‘I am the older brother they never wanted,’ laughed Antony but actually he is like their older brother and they have simply forgotten that they are not related. In the Grimshaw household Sean was originally a lodger but is now most definitely part of the family. He is Eileen’s rock and someone she could not manage without.

Sean is more than that too. Sean, uniquely, amongst the cast has no enemies in Weatherfield. He is its moral voice and compass. If Sean says it’s wrong, then it’s wrong.

Who then is the new man in Sean’s life? Well, Underworld has planned an outing, but gradually everyone drops out except for Sean and Sinead. Sinead is a strange dancer, apparently, but she does manage to get Billy, who is leading his congregation the next day, and Sean, talking. The actor who plays Billy is in the show initially for 6 months. It could be more, but Antony doesn’t know what the writers have in store for Sean and Billy. What Antony does know is that Billy is a very hardworking vicar because his work is a vocation rather than just a job. Billy is also a modernizer, which may well cause conflict with the more traditional members of the congregation.

Interestingly, Antony says that he never watches himself playing Sean. He fast forwards to avoid himself, though he does enjoy watching the rest of the cast.

Asked if there were any downsides to playing Sean, Antony spoke of the vile abuse he receives on social media. He wasn’t specific about the insults but did say that they consisted of the vilest, nastiest insults that anyone could possibly throw at someone. It is then most admirable, under such provocation, that Antony has never once retaliated – in fact he makes a point of never ‘slagging anyone else off.’

On the plus side, and because he is in the show, Antony has several achievements to his name. He is an ambassador for the Royal Manchester Children’s Hospital. He has met the queen, he has been twice to Number 10, under 2 governments, and his mum, Edna, is very pleased by this.

Antony’s mum, as mentioned, is called Edna and that is what Antony has called her all his life. His mum would have loved him to call her mum, but it wasn’t to be.

There is a gentle, but solid self confidence in Antony Cotton, which seems to have been with him for some time. As a five-year old, just starting school, he said to the teacher, ‘I have come here to learn how to read and write, no to colour in.’

Asked if he would like to stay in the show until he’s as old as Norris and Rita, there was a definite yes. He envisages himself and Fiz as the future Norris and Rita. Though of course, Sean would be a much more likeable person.