Is Corrie's Gavin a good guy or a bad'un?

This was posted on The State of the Street and is reposted here with permission.

It was pretty clear that Gavin Rodwell  was going to be a wrong'un of some sort. Soaps are not produced to have happy reunions and happily ever after, especially for a family like the Platts. Yes, at the moment, I'm including Michael in that family.  Here on the Coronation Street blog, a couple of people have made comments guessing that Gavin isn't really Michael's son.

Not only is he not of Michael's DNA, as in, Michael's ex had an unfortunately timed affair, but  this man that calls himself Gavin Rodwell is someone else entirely. That is a brilliant twist! Has it been done before? Of course it has. But I still like the idea. And thinking about it, there had already been signs.

"Gavin", when questioned about his mother, was very cagey, changing the subject. Obviously, if he wasn't the real Gavin, he wouldn't know much or anything at all about Michael's ex. Gavin was touted by his ex-girlfriend, the manager of the wine bar, as being a dab hand with cocktails but the man we saw on our screens didn't know his martinis from his cosmopolitans.

He seemed reluctant to get too close to Michael. On the surface, that could have been attributed to a son, long abandoned by a father, who wasn't so sure he was ready to forgive but in reality, it's actually a man who doesn't want anyone to get to close lest they discover he's not who he says he is.

We know he's not Gavin, now. Gavin's travelling and out of touch somewhere. Could this man be a roommate, a good friend, a cousin or half brother perhaps, or even a partner? He seems to live at the flat and Gavin's mail is arriving there because we saw the man looking at it the other night. This man is unemployed and it sounded like he was looking for money but then he looked embarassed to take Michael and Gail's offering. 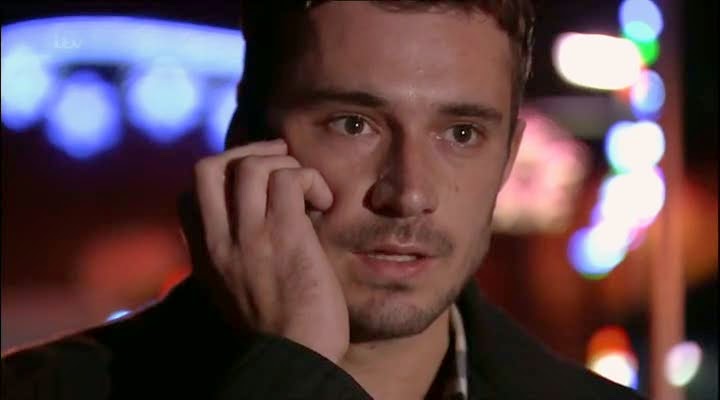 He even seems like a nice bloke, so far. There's been none of those private sneers or satisfied smirks when nobody's looking.

Here's what I think: Maybe he's been scoping Michael out on behalf of Gavin, perhaps trying to protect his friend from someone that he thought might have been insincere or out to fleece Gavin and now realizes that Michael is the real thing and maybe not the monster that Gavin has always thought he was.  He actually seemed quite worried when he found out about the heart condition and tried anxiously to get hold of Gavin. That felt like the concern of someone who is close.

I applaud The Powers That Be for revealing this straight away rather than letting us stew for a couple of months. Now we get to watch the oncoming train knowing the bridge is out and there's nothing we can do to stop the derailment. Let's just hope this doesn't deal Michael that heart attack he's got floating around the edges before he gets his heart  condition sorted!