Heroes and Zeros: Another year on t'cobbles 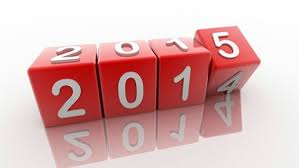 (This post was originally posted by Clinkers (David) on the Coronation Street Blog in December 2014.)

Come midnight tonight and no doubt we will all be gathering around a piano and toasting the arrival of 2015 with a bottle of milk stout. I really do need to find a better local pub. Like everyone else on Planet Earth, today is a day for looking back as well as looking forward. For us lot, the die hard Corrie fans, it's a chance to ponder on the past twelve months in Weatherfield.

Was it a good year for you? These are my own ramblings - my own take on who I thought was hot and who certainly was not in 2014. Other opinions are available from local retailers.

We got rid of the elder members of the Price family. HURRAH! Having spent years moaning about their every utterance, we finally got to see the back of the bo-ho battleaxe Gloria and M'Lady of the Beige, Stella. I felt sad at the crummy excuse of a character that had been foisted on Sue Johnston. Gloria could have been wonderful and she wasn't. What a waste. 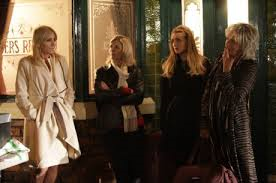 For me, there is always a band of Street folk who I just don't care about. Fine actors one and all but characters who just make me shrug and think "And?" Step forward Rita and Norris. The latter just seems mired in nastiness for most of the time and has few redeeming qualities. As for Rita, I know that people adore her but I don't. I didn't like her in the seventies. As a kid, I always thought she was a bit nasty and spiteful, a little like one of those vicious teachers that always seemed to surface in primary schools. As far as 2014 goes, Reet got dumped by Dennis (OK, for the hideous Gloria) but it felt more like a lucky escape. Well done that man!

Like many of the bloggers and commenters, I also have issues with Michelle. Why can't they just make her a little bit softer? Maybe staple her arms to her sides and stop giving her eye make-up that resembles Endora from Bewitched? I really want to like 'chelle but it is oh so difficult. Maybe 2015 will be her year to shine? 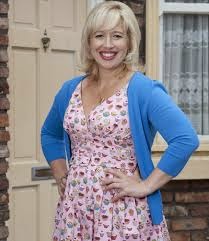 Anyway, enough of the whinging old nonsense. For me, there were more positives than negatives in 2014. Picking a Character of the Year is far too difficult though. If we were doing it Miss World style, then the final line-up would definitely include Julie, Tim, Steve, Carla, Eva, Sally and Beth. Katy Cavanagh's portrayal of the People's Doris Day has been one big old rollercoaster of joy. She's breathing new life into Dev (see below) and will be running the Corner Shop next year. OK, the latter isn't true but if we all form a circle and collectively hint about it . . .

Likewise, Joe Duttine as Tim has provided us with some fine moments. He has turned what looked like a slightly worrying loser into a bit of a hapless hero. Whether he's balancing on a roof top or bro-mincing with Kev, it's all quality stuff. Tim is the perfect foil for Sally and again, the introduction of one character boosts another.

Congratulations to Simon Gregson for twenty five years as Steve but especially for showing him as never seen before. Confused and vulnerable are two words we would never have associated with Steve but here he is, knee-deep in a shocking storyline, shining a light on an illness that resonates with many of us and our families. 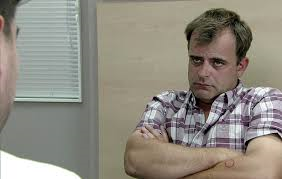 I never expected to admit to enjoying Dev and Tracy this year but surprisingly, I did. Kate Ford gave us a cracking performance as her life with Rob was ripped to shreds. The Dev/Julie match(can we call them Dulie?) is inspired and could be the gift that keeps on giving in 2015.

One of my favourite characters of the year though has been Maddie. Does that come as a surprise? Amy James-Kelly has a great dry delivery and for me, has done a great job in showing Maddie's transformation from surly scruff to burgeoning self-confidence.

Personally, I think there is a lot to be positive about. Admittedly, the Nazirs are a work-in-progress and the Windass-Armstrongs might be a stronger force after their Spring reshuffle. Time will tell.

For me, one of the great joys about being part of the Blog family is reading other people's comments. No doubt there are one or two of you who loved Gloria Price or a few who start grinding their teeth whenever Julie appears. We all have stack of characters we love and loathe. Here's to a Happy 2015!

maybe the storyline for Steve is a good way to transition Michelle into a 'softer' more caring character?