The Joy of Julie 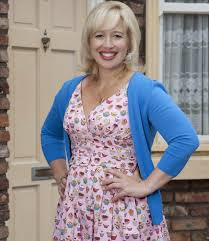 (This post was originally posted by Clinkers (David) on the Coronation Street Blog in November 2014.)

For a few of the Corrie women, the last week or so has not exactly been vintage. Viewers have had a good old grumble about moaning Michelle and Weatherfield's most unsympathetic mother, Liz. Well, enough of them. The real slice of joy being served up on t'cobbles this week was Miss Julie Carp. She's Doris Day with a buttered barm.

Teaming Julie up with Comedy Dev seems to be an inspirational choice. Jules had been floundering a little since she ditched Brian. Despite living on the Street, we've never seen the inside of her flat. You just know it's going to be a sea of gingham throws and Cath Kidston cake stands but we, the viewer, need to be invited in. Julie is obviously in the throws of some sort of community service as she has been charged with the task of rescuing Dev. As well as having to cope with his own loud outburst at INAPPROPRIATE moments, the Dev-ster was also falling under the spell of Weatherfield's own dark lady, the loveably loopy Mary. She used to be Scary Mary of course and had this been a few years ago, she would have had Julie burning to death in a wicker man by now.

Instead we get a touching story of unrequited love and Julie helping Dev to do the right thing by Mary. The latter is now an integral part of the Alahan family, It's been one of those surprising relationships that Corrie often hurls at us. Becky and Clare, Ken and Carla and more recently, Norris and Craig show us that friendships can be formed by the most opposite of people.

Is Julie now entering her Corrie prime? Well, she managed to ditch the doctor from Holby City mid-date and is now cosying up with Dev. We can but hope that she becomes a permanent fixture. Her 'to do' list should include cleansing number 7 of that slightly 'butch' make-under that has festered since Sunita's Baps were in charge. Gingham and polka dots to the fore! Julie also needs to take her rightful position behind the counter at the Corner Shop. She is shopkeeper gold and would offer a warmer welcome than her bellowing beau or the mumbling So-feh. Julie might be more Maureen Holdsworth than Maggie Clegg but to paraphrase Rihanna, she will shine bright like a diamond. Or maybe something diamonique from Barlow's Buys. 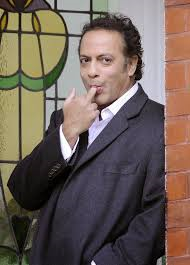 Katy Cavanagh is one of the Street's most expressive actors and has the ability to make the viewer care what happens to Julie. Devulie  - Corrie's new golden couple. Yay or nay?

I think Julie and Dev make a great couple who have more things in common than she and Brian didn't have in common.

Thankfully Mary can remain a good friend to both of them, and the kids.