Characters/Actors of the week: I continue to be hugely impressed with Paula Lane and Jack P. Sheppherd.

Tact of an Elephant award: Sally insulting Anna by sucking up to Yasmeen as a potential new neighbour. Nice and sensitive, there, Sal.

Nerves of Jello award: Julie is a nervous wreck anticipating her first formal date with Dev. He's pretty wobbly, too! Maria was nervous for her date with Luke, too.

Overspray award: Luke got enthusiastic with the aftershave. 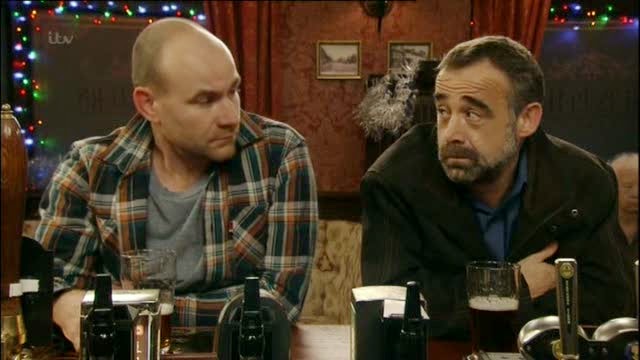 Lines of the week:
Eileen to Sean "You're usually chapter and verse" (on his evenings out and considering that's a Biblical reference, she's closer to the mark than she knows!)
Sharif re Santa "I've decided I'm not going to do it" Alya "I'm not sure that matters"
Sally "Tim looks confused" Yasmeen "And you think that's the photographer's fault?"
David "There's nothing normal about needing a fix before changing a nappie"
Audrey "As excuses go, that is so ridiculous, it must be true"
Sally "When you've sat on the Manhattan Range, you can't settle for cheap imitations!" (And that was only the end of a deliriously delightful snobby Sally moan!)
Yasmeen "Educating the mind without educating the heart is no education at all"
Sally "With her (Beth) and Julie, it's like being stuck in the middle of a rom com (romantic comedy). All we need is Hugh Grant!"