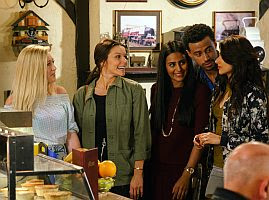 Phelan has to scramble to cover his tracks and later in the week, there's a very close call. Will comforts Michelle then attempts to set the Bistro up for a fall for which Rich is blamed again. Why is Rana tetchy about Kate's new girlfriend? Sally launches a campaign. Toyah takes the first steps towards surrogacy but it doesn't start off too well. Rita's memory is a concern. Seb and Faye make plans.

For more photos and detail see the Moosejaw Mercury on Corrie.net

For more detail and photos check out the Moosejaw Mercury at Corrie.net.
Tvor @tvordlj on Twitter
Posted by Tvor at 08:30

Sorry guys, added the link to corrie.net for the previews.