In praise of Connor McIntyre as Phenomonal Phelan

(This post was originally posted by Ruth Owen on the Coronation Street Blog in August 2017, reposted with permission.)


Connor McIntyre inhabits Pat Phelan so convincingly that he is one of the best actors to tread the cobbles. On set, he is mesmerising, particularly in his ability to convince people of what he is doing, when in truth, it’s all lies. Eileen, not the most gullible of characters, seems to believe all he says and she quite clearly cares for him, even, possibly, loves him. But how does he feel about her? He must have some feeling for her, as he goes through the motions of being married. Is she a port in a storm or does Phelan have genuine feelings for her? 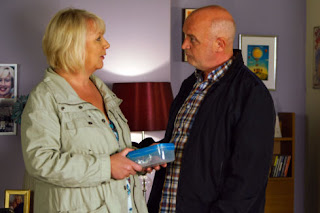 As for Phelan and Todd, they seem to have arrived at a truce, a temporary one, maybe, but a truce nevertheless. Perhaps that is the only way the two of them can deal with each other - takes one to know one. (In fairness, Todd has shown a softer side of late and Summer is bringing out the best in him).

Focus on Phelan has been quite intense of late – particularly finding Nicola to be his daughter. Is it for her sake that he felt compelled to visit the priest, when he confessed that he had done a bad thing and indeed was still involved in doing that bad thing? The very fact that he sought the help of the priest, is a clear indication that Phelan does have a conscience, though in his previous incarnation as the horrendous man who forced Anna Windass to sleep with him, he appeared more as a pantomime villain, a caricature, than a fully rounded character. 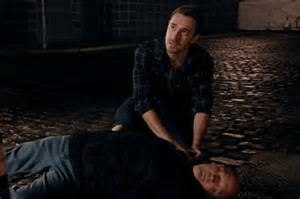 Friday’s ending was a stroke of genius by the writers and even better for the fact that there had been no spoilers. That’s the way to do it. I’ve only just seen Friday’s second episode in full. What a tour de force that was! Phelan eating his eclairs in front of Andy and musing as to what he would have for his final meal and concluding that he would choose eclairs. He showed some self-awareness too as he recognised that there would be a queue of people more than happy to administer the lethal injection for him.


‘Just a flying visit,’ he declares, as an opener and the thrill of it is that we cannot see to whom he is addressing this remark. ‘But on the bright side, chocolate eclairs are on special offer.’


He says he is at a crossroads in his life and sings a few bars of Fagin’s song in Oliver, which goes, ‘I am reviewing, the situation.’


He continues and it’s almost like a soliloquy, as he thinks aloud. ‘I might go left; change my ways, make the people who care about me proud. If I go right, well, we all know where that leads – problems, problems, problems.’ We hear the clanking of chains, a shout for help, Oliver’s face revealed in the half light – brilliant.


To lock someone up, alone in a cellar, with no hope of release, with the threat of death hanging over them, is of an order of real cruelty - Phelan’s true character exposed. In last night’s episode, we see Phelan blaming Andy for this current situation. ‘Every day, I’m trying to be a better man,’ says Phelan. And, ‘Just when I’m the happiest I’ve ever been.’ This is of course all very psychologically convincing. It is as if Phelan blames Andy for the situation he finds himself in, of holding someone prisoner in a dirty, dank cellar. And then, ‘How come you’re the one chained up, but I feel trapped.’
All this from a man who was supposed to be in the soap for just three short scenes.

No question that Connor McIntyre is a brillant actor, however having said that it is time for Phelan to receive his just desserts. No way should he be allowed to get away with how cruelly he is treating Andy completely unforgivable. Time to pay the piper!