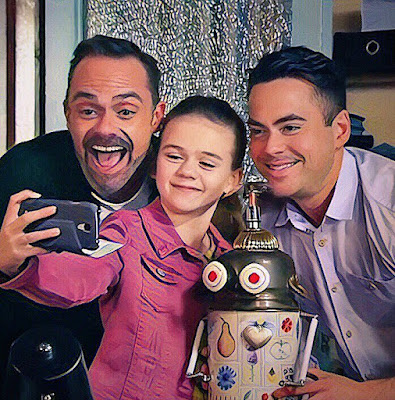 
Now then, I'm a lady of a certain age and have been watching Coronation Street since I was a girl.  I've also been involved in th'internet side of my favourite soap since 1993. In fact, the first two words I ever typed into what passed back then for a search engine (anyone remember Lynx? Mosaic?) were "Coronation Street".  And I've seen, and been part of, Corrie phases and fads online that come and go.

My first ever Corrie web-page was "Spider's Web" (ahem!) so I know what it's like to be a huge Corrie fan, wanting to express that online, joining online communities with other fans and sharing the fun. When Brooke Vincent and Sacha Parkinson who played Corrie's first lesbians, Sophie and Sian, were on the show, there were hundreds of fan sites, twitter feeds, tumblrs and facebook groups set up to express in varying degrees - desire, love, lust, gratitude - at giving young girls a voice, young lesbians a voice.

Then the internet went wild once again with young girls hearting Carla Connor and loving Alison King - the turn of the Aliettes.  You can read more on that here.

And now, it's Tilly - the Todd and Billy relationship that's set the internet alight. And so, here we have two Tilly fans who tell us what makes these two men so special for them as Corrie fans. 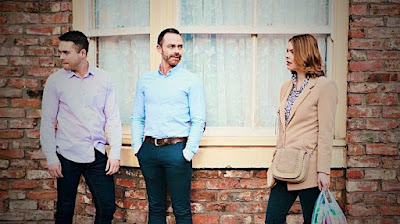 By @Denlives1 who  also runs Tilly Mad on Tumblr at http://denlives.tumblr.com/

It's a fact, undeniable and totally undisputed....my life has been forever ruined by the hottest, most genuinely authentic, let me just kiss you quick under my rainbow umbrella, loved up big time, couple on the street.....or, by their other name....Tilly.  It's just a no nonsense, believable airing.

Their relationship which was built from a friendship, has lead to a very deep, true and real type of love.  It wasn't rushed, dealt to us in tiny morsels. And that just made it all the more delicious when they did eventually get together and a whole year on, Tilly are still as fresh and exciting as they were when they were first examining each others tongues in great detail in Eileen's kitchen.

When the same scene can be watched ten times and each time you notice something different, something that flickers a spark in a slightly withered heart, that can't be wrong....can it?

I didn't notice the way Todd looked at Billy the first time around, the second time I picked up on that little giggle that got caught in the back of Billy's throat, third time there's a wry smile on Todd's face causing dimple's in his cheeks and now I can see that Billy has noticed too and is stroking Todd's thigh in response.

I often wonder how much of this is scripted into the scene, or whether it's down to the tremendous on-screen chemistry of actors Bruno Langley and Daniel Brocklebank. Either way, whatever path has led to these moments, the looks, the touches, the noises that escape from Billy's mouth when Todd's being playful, please, please, please don't let it stop. All the kisses, the looks, the touches, they are a true testament to the whole group of people that are behind these scenes, not just the main players.

And also, as much as I love Tilly, I like them both as individuals too. I think that's majorly important for an on screen relationship, and what I feel means that corrie has the opportunity here for a long lasting, couple of the ages with this pairing (*cough Tilly wedding *cough).

Together as Tilly they are simply electric, but singularly they can hold their own story-lines and scenes, both characters are engaging in their own right. Let's not skip or gloss over the fact that both characters are visually appealing. I've not mentioned it first because it's not the most important reason why I like this couple, but it needs to be said because it is very high on my list. Tilly are just down right sexy.

I've written this in response to a request asking for the views and opinions of the younger female corrie audience. Although I am female, I wouldn't necessarily call myself young, but hey, age is just a number anyway right...but the way I see it, Tilly has the potential to appeal to a such a broad spectrum of people, regardless of age or sex.

You live the journey with these guys, because with everything that's thrown into the mixing pot,
the tremendous acting, the beautifully written scripts, the direction, the wardrobe (because sometimes they colour co-ordinate Tilly - oh boy oh boy), it's a recipe for a success. Put bluntly, if Tilly were a dish, they'd definitely be one of Nigella's, sizzling, tasty and delicious.

And to end.....at this moment, Tilly are the only couple on the entire street to have a ship name....which means they SLAY.....end of.

Let me start by saying that I am way too invested in Todd and Billy, in fact if they ever do get married (sometime in the hopefully not so distant future) I may have to take a week off of work to emotionally prepare for it. Somehow, they've managed to hook me in and made me a fully fledged Tilly shipper.

What is it about Tilly I love? Well for me they just work. Soaps are full of couples that lack chemistry or make each other miserable and you find yourself thinking "What do they even see in each other?" but with Todd and Billy they genuinely seem to make the other one happy and you can 100% understand why they're together. They're very affectionate with one another, supportive of each other, make each other laugh and have a very natural chemistry.

Yeah, they occasionally bicker but that only adds to the authenticity of their relationship and despite the obvious differences between them (which keeps the relationship fresh and interesting for the viewers) it's quite obvious that they truly love each other.

As we know Todd has a very colourful romantic past and it's been a revelation to see him finally fall in love and settle down and thanks to Billy's lovely influence we've got to see shades of the old pre-London/pre-bitter Todd again without ever losing that typical Todd edge that fans of the character love.

Sometimes soaps have a habit of pushing characters together too quickly and without a proper build up but the Tilly relationship bloomed out of friendship and instead of an affair or a quick fling we got to see a genuine affection grow and them finally realise that they'd fallen for each other and it was beautifully played by both actors.

And the acting is another reason just why the Tilly relationship works so perfectly - Dan Brocklebank and Bruno Langley are both excellent and very charismatic actors - they have great chemistry between them onscreen and it's the little looks and touches they add to every scene that makes the Todd and Billy partnership such a joy to watch.

I'm very proud of how Corrie have created a positive and healthy coupling in Todd and Billy - there have been a couple of bumps along the way but they continue to evolve and are stronger than ever. There's a lot of love and a a lot of humour with them and one of the recent scenes of them reacting very differently to Summer not being at all sorry for giving Amy a slap (Billy's shock and Todd's smirk) perfectly captured the Tilly dynamic.

I for one am very excited for what the future holds for Todd and Billy and how they handle their new roles as parents to Summer. In my humble opinion with their very different outlooks that compliment each others personalities, easy chemistry, passion and humour they have all the makings of a classic long term Corrie couple."