How do you feel now the secret is finally out? Were you pleased to have been able to keep Andy’s return secret?
It’s amazing, it’s such a relief that we managed to keep it a secret because it was difficult but I think it really paid off from an audience point of view because we were really able to give them a surprise. I feel happy, relieved and pleased I can walk the streets again without a hood over my head.

How difficult was it?
On a personal level it was hard because when you’re working on a big show, doing exciting storylines you want to be sharing it with friends and family. On a day to day level we had a lot of trouble keeping it under wraps and we went to great lengths which you will have seen in the video diaries we made but I think it paid off.

What sort of reaction have you been getting on the street?
It’s been pretty huge, it’s been funny in the street people shouting ‘he’s let you out then’ and I say “yes just out picking up some lunch then I’ll go and chain myself back up again.” The response has been overwhelming, truly great.

What has the costume and makeup experience been like for you, considering Andy is meant to have been captive for all this time?
Well it’s not often you spend 45 minutes in make-up trying look dirty, normally it’s the other way round! But it helps with the character; the grime under the fingernails, the grease in my hair, the mud crusted costume, and that for me is a really useful tool to get into the mindset of where the character is.

Since we first saw Andy with Phelan we’ve witnessed his desperation, what has happened to Andy’s state of mind as time has gone on?
As with any person in captivation he’s gone through many states of hope, desperation, essentially bonding with the person holding you captive as they’re your only link to the outside world. Initially his feelings to Phelan were out and out hatred but as time has gone there’s been a shift towards him tolerating Phelan, maybe understanding him a bit more, working with him almost more than against him as when he goes against him that’s when he gets locked away for a week without food and that could be the last time he sees any human contact so he’s resigned to his fate. You’ve seen him make an attempt on Phelan’s life and now psychologically he’s got to a point where he’s at the end of the line, he needs out.

Is he ready to do anything to escape Phelan’s clutches, would he really go through with suicide? Does Andy believe there is no way out for him?
I think he genuinely does, the only hope he has is knowing that Steph is there in Portugal and that is his only goal, to somehow get to her. But the hope is fading, he’s sustained this injury from the fight he’s physically unwell as well as mentally unwell.

Is he clinging on to hope that Phelan will release him, or is he certain his days are numbered?
He absolutely does and it’s almost a jolt for Phelan, he effectively left Andy to rot with this wound then when he came back and found Andy to all intents and purposes dead, he acted quite interestingly to that. There is a bond between them now and there must be a reason why Phelan hasn’t just done away with him. This was the perfect opportunity, like with Michael’s death Phelan wouldn’t have been directly involved, Andy would have died of natural causes after sustaining this injury leaving Phelan off the hook, at least in his own conscience. But we see this strange caring side come out of Phelan and we have to question why.

Has Andy developed a case of Stockholm syndrome with Phelan?
There are elements of that. I think Andy has got wise to Phelan’s behaviour, it’s not a hostage situation where Phelan is there all the time, he pays him visits as and when he chooses, so it’s more like a parent child relationship. I think Andy empathises with Phelan at times but he’s not so enamoured with him that he’d do anything for him, he’s still got a goal, a way of playing Phelan towards an end game.

When Phelan reveals he’s taking Andy to France to set him free what goes through Andy’s mind, does he believe this is really it?
It’s a mixture of complete emotional overload, with a nagging sense of disbelief, how, where why now, what’s happened. Andy knows about Phelan’s daughter, is he a changed man? Has the fact that Andy was so close to death triggered something in Phelan, there’s a lot spinning round in his head. He wants to belief but the hardened more cynical side of him is asking questions. Then the closer it gets with the fake passport, the new clothes Andy starts to buy into it and the more free he feels the more he dares to belief. 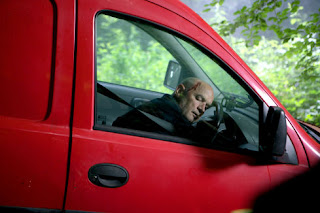 Find out all about the Corrie van crash here

Talk us through the crash and Andy’s escape. When the van crashes what is Andy’s first instinct, check on Phelan or just run?
Andy’s tied up in the back of the van to avoid him making any false moves, the next thing Andy knows he’s flying all over the place because the van has crashed and he manages to kick the door open using every bit of strength he has left. He hasn’t experienced daylight for a long time, he’s still drowsy from the injury, he’s disoriented but he does think of Phelan and he runs straight to the cabin to check on him. He manages to free himself from his ties and he calls an ambulance. His first feeling is compassion but as it dawns on him that this is his chance and he thinks about what Phelan has done to him over the last 8 months, he has a complete change of heart, he’s decides this is my opportunity and it’s now. He puts the phone down and he runs.

As he makes a run for it what is going through Andy’s mind?
He’s very disorientated and he doesn’t have a plan, he’s also very weak after months of barely even walking, he’s on unfamiliar terrain, he’s sensitive to light. He’s just running wildly through the woods with the hope he’ll come across someone and can make the call for help.

What was it like filming the crash itself? Did you do any stunts?
The van was nicely crashed for us in the woods then I spent the whole morning throwing myself around Corrie studios in the back of Phelan’s van.

If you were a betting man, would you put money on Andy coming out of this in one piece?
I’m sure I wouldn’t be allowed to put a bet on it for ethical reasons but let’s just say Andy gives it his all and it gets interesting.

If Andy makes it out alive, could he ever forgive Phelan for this?
I think Andy would be more interested in never seeing Phelan again rather than any sort of revenge or court case. Andy’s main goal at the moment is to get as far away from Phelan as possible, hopefully find Steph and disappear.