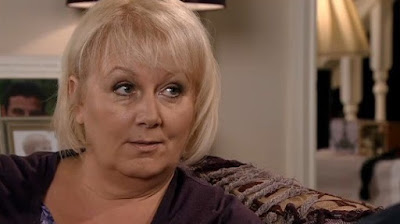 
Has Eileen been worried about Phelan’s behaviour in recent weeks?
He has disappeared a couple of times and she confided in Nicola that she thought he was behaving strangely but Nicola put her mind at rest and told her that she had nothing to worry about. He did have the head injury and he has seemed more on edge about work.

Does she think his strange behaviour is just down the Nicola situation?
Yes and she thinks he is worried about work, it isn’t something that is unduly worrying her. She knows he wants to build a relationship with Nicola and she knows they have both found it tricky in the beginning.

After the whole flats debacle do you think she trusts him completely?
She does trust him, her own son was involved in that development so she has no reason to think that Phelan was anything other than another victim of a scam Vinny planned. Eileen has had enough men in her life who turned out to be wrong 'uns that she wouldn’t have married Phelan.

What happens when she arrives at the house he’s renovating and he acts oddly?
She discovers from Liz that he has been to the medical centre so alarm bells start ringing. Nicola calms her down and tells her to visit the house he is renovating and gives her the address. When she turns up he is shocked to see her and she demands answers. She wants to know why he hasn’t told her about the house and why he has been to the doctors.

Does it occur to Eileen that he’s in too deep with something dodgy?
She is angry that he has kept a secret from her and that coupled with his slightly strange behaviour of light does make her wonder but he is very good at pulling the wool over people’s eyes and talking himself out of a situation and he does seem to be trying to do this with Eileen.

How does he explain having to get anti-biotics?
As ever he has a good explanation and one that Eileen has no reason to disbelieve.

Does Eileen buy his story? Does she notice anything odd about the house, or see any trace of Andy?
Eileen doesn’t really see any reason to not believe what Phelan is telling her, remember she has no idea he is a compulsive liar and conman, as Andy is in the cellar there are no tell tale signs anywhere else at the house. It does simply look like a house that is being developed.

How do you think Eileen would react if she found out what has happened to Andy and Pat’s part in it?
She would of course be horrified, it is completely unimaginable to think that he has kept this secret for so any months and has got on with his life as if everything was normal whilst all the while keeping someone prisoner and going to visit his prisoner behind Eileen’s back. He is taking food, medicine, basically leading a double life.

Obviously, he hasn’t actually killed anyone by his own hands, so do you think Pat might still be redeemable?
The viewers love having a baddie around so I guess that is possible but not if anyone else on the street finds out. Eileen would not keep this a secret if she knew, at some point he will have to get his comeuppance but it doesn’t look like being any time soon.

Would you like to see Eileen be the one to take Pat down?
Eileen has always been very moral, she knows right from wrong. She isn’t holier than thou and she has covered up and helped her sons over the years but this is another level altogether so it will be interesting to see what exactly Eileen does if she finds out.

There have been so many twists and turns, how have the public reacted when they’ve seen you out and about?
They all try to warn me, it’s great that the storyline has got everyone talking and fantastic that we managed to keep the secret of Andy being held captive. The audience seem to love surprises.

Are you as hooked as the viewers on finding out what it going to happen?
Yes we all want to know when and if Phelan is going to be found out. We film about eight weeks ahead and at the moment he is still up to no good. He is getting more and more desperate though as the net is closing in a bit and he has made a couple of mistakes which is not like him.