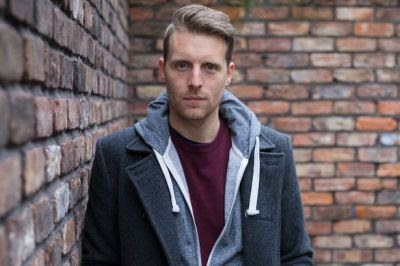 What is Nathan’s state of mind since his arrest? Is he convinced he’s going to get off when his case goes to court?
He has been constantly manipulating Mel, getting her back onside, so that he can use her to get back at Bethany. He thinks if he can get Bethany out the way, he will be in the clear.

We discover that Nathan is still in contact with Mel, how is he still controlling her and what is he asking her to do?
Mel is vulnerable, she craves love and a stable life. She hasn't got the support Bethany has. Nathan promises he'll give her a home and that they can start a family. He swears to Mel that he loves her more than anything in the world and he pretends to get upset if she questions him. He promises her the world and just needs one thing in return - Mel has to stop Bethany getting to court, whatever it takes.

He’s played a dangerous game putting Mel in the house with Bethany and the Platts, is he totally convinced that Mel will stay true to him and Bethany won’t be able to talk her round and turn her against him?
Yes. He keeps the squeeze on her from his burner phone in prison. She's always done what he needs before, there is no reason to believe she'll turn on him now. Bethany has her family and her friends, Mel only has Nathan.

On the day of the court case is Nathan still totally confident that he’s going to walk free?
It's touch and go, but he thinks he's a master manipulator and can get anyone round his fingers, including the guards, the police and his female barrister. I spoke to a police inspector who said a man charged with grooming had tried to seduce her while he was being interviewed. Nathan is largely based on him. His self confidence is delusional.

When Bethany doesn’t arrive in court is he pleased to see that Mel’s plan to keep her away seems to have worked?
Yes. Dream come true. He knows he can slip through if he keeps lying well and witnesses don't come forward. I think he finds the adrenalin rush almost fun. He's back in control. He knows he's not in the clear til he's out. But without Bethany testifying, the case is weak enough to let him wriggle out and carry on doing what he is doing. He's already making plans.

Does Nathan start to feel the nerves when he’s stood in the dock?
Once he's in the dock, it's in his hands. He thinks he can talk his way out of anything. The jury will fall for him in the same way Bethany and Mel have.

How does he handle being questioned by Bethany’s barrister, do we sees Nathan squirm or does he keep his cool?
Nathan's barrister has done a good job selling the story that Nathan has constructed, but it is clear Bethany's barrister doesn't believe a word of it. When Nathan realises the jury don't seem to be falling for his charm he suddenly gets stage fright.

As the trial comes to a close does he still rate his chances of walking free?
Nathan's been a joy to play, because he is one of those pig headed people who think that if they say something it's therefore true. He convinces himself he's done a good job, therefore he must have done. He's convinced himself he's innocent, so he must be. Remember he thinks everyone around him is playing a small role in the movie about his life. He thinks he'll get off, he's the hero.

Have you enjoyed reprising the role of Nathan?
Very much. The way he thinks is very seductive, and the self delusion and bullying in these scenes at the court is actually fun to play. But of course, seeing the lifelong damage abuse causes is a hard lesson. That's why it's so good Corrie are doing this storyline.

Was it important for you to see Nathan face justice?
Yes. There are growing conviction rates for abuse cases. The bravery of victims who come forward is being rewarded.

What was it like filming the court scenes?
The director made it feel like a film set! It was very exciting, with lots of angles and great lighting. When we finally came to record the verdicts my heart was pounding. I felt so, so sorry for Bethany.

Whether Nathan walks free or gets sent down we know it’s the end of his time in Weatherfield, have you enjoyed working on the show and taking on this character?
Playing a role for this long, as new episodes have come up and the plot has twisted and turned, has been really exciting. I have loved watching this snake grow. I don't like him, but I like playing him.

You’ve been able to use the role to work with a number of charities on child sexual exploitation and grooming, was this important to you while playing Nathan?
All the way along I have had help from members of the police, social services, charities and survivors. They have provided me with confidence at every step. I am very proud to be Patron of Voicing CSA and to work so closely with the NSPCC too. Also, I have to say Kate Oates and the whole team at Corrie have been incredibly supportive all the way through.

Do you know what you’ll be working on next or is it too early to say?
It's really exciting - there are a number of things coming, but first will be an animation I have recorded for Voicing CSA. We are hoping to launch it just as things come to a climax in Corrie.