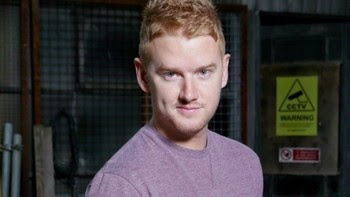 
Gary has been off working in the Ukraine, when he returns this time do we see a different Gary? Is his job starting to take its toll?
I think it’s getting gradually worse, it was clear to see how bad it was from the bruises last time he came home, but you get the impression more things have happened this time. Fresh injuries are appearing from whatever he’s been up to and he’s clearly troubled.

Does Sarah spot this or has he managed to convince her that the job is low risk, it’s good money, and that everything is fine?
She’s probably a little bit wary of it because she knows what’s at stake and it’s a risky job he’s doing but I think he has managed to keep it on the whole away from her mainly, no one really knows what he’s doing and how dangerous it is.

But he can’t keep it away from his mum Anna can he?
He can’t no, he’s brought some presents back for Faye and as he bends over to go in the bag to get them his shirt rides up and his mum spots the injuries on his back. There’s a lot of bruising and so Anna flies of the handle and questions him. Gary sort of comes clean for the first time about what he’s doing, but on the premise that she keeps her mouth shut and doesn’t say anything to Sarah.

So it’s not putting him off carrying on with the work is it?
I think he’d lie to call it a day but it’s hard to go back now he’s done that first job and seen the money. I think his long term plan is to get enough money for a house and then he can move out of Izzy’s to live with Sarah and have all the family under one roof, then he’ll stop.

But as he keeps returning for one more job do you think the stakes will go up?
Yeah things get more dangerous and the inevitable is going to happen I think.

How is Gary’s relationship with Sarah because they want through a rocky patch initially when Sarah didn’t want him to go to the Ukraine?
Gary started drinking a lot when he last came home, probably to block out what he’d been through in the Ukraine. He went out when Sarah was working, which Gary wasn’t too happy about, he was kind of off with her and he was very snappy with her. He went out drinking one night to unwind and that’s when he met Nicola. He confided in her about what had happened in the Ukraine but then he worked out that she was Phelan’s daughter and pulled back, he felt bad that he’d told her a lot, things he hadn’t told Sarah. He felt bad on Sarah so he went and apologised which left things alright between them but he still feels bad that he had opened up to another women. He’s been trying to make it up to Sarah this time but he’s clearly got a lot on his mind and he’s not the same Gary.

So they’re getting back on track but tell us what happens in the Rovers when Gary loses his temper?
He is on edge the whole time in the Rovers, he snaps at Craig that day as well for no reason, he just starts on him on the street, then he snaps at Tyrone and Kirk in the pub.  Sarah tells him to calm down but he flies off the handle and goes outside. Sarah comes out to see what is wrong with him, he takes offence and he just loses it. He’s really rude to her and storms off.

What do you think is making him feel this way?
For me it’s the PTSD rearing its head from when he was in Afghanistan and I think it’s definitely elements of that coming back, that’s how I have tried to play it, him being very volatile and wanting to start on every lad that walks by. I think the pressures from this work are getting to him and brining a lot of demons back to the fore that he’s worked hard to overcome.

After refusing to talk to Sarah, Gary again finds himself with Nicola and decides to go back to hers for a drink. Why has he found that he can confide in Nicola?
I don’t think it’s anything in particular, I think it’s just that she happens to be there at the right time. She’s the only person that he’s told exactly what happened in the Ukraine and what he had to do, which is what has triggered all of this, so that is probably one of the reasons that he feels an attachment to her. When he’s in the ginnel after he storms out of the Rovers following his argument with Sarah, Nicola happens to be there, she finds him bleeding and says she will sort out his injury for him.

They then have a few drinks and one thing starts to lead to another, will he cheat on Sarah because we know he does really love Sarah?
It’s a tricky one, he does love Sarah, things are great between them and they are so good together but I suppose in the heat of the moment he isn’t thinking clearly. This isn’t the Gary that’s been around before he went to the Ukraine, this is someone else and I think it’s taken over his mind almost, he’s gone a bit crazy. His judgment is clouded by drink, he’s just had a row with Sarah and he’s not thinking straight.

How does Gary feel when he goes home?
He feels awful that he’s confided in Nicola again and not Sarah. He goes back to Sarah’s house and while he doesn’t come clean about Nicola, he does about what’s happened in the Ukraine, about how dangerous it is and the fact that he’s not been letting on how bad it really is.

Are you enjoying playing this different side to Gary?
I love it. This storyline ties back in with the old Gary for me, which is why I joined the show in the first place, to play that volatile guy. But I think now that you’ve seen a nicer side to him the audience are more sympathetic with him, he’s not just a violent thug that came in with the Windasses, he has a child, he has responsibilities, we’ve seen him be ther for both Sarah and Bethany. For me as an actor it’s great, I’m loving doing this whole story and it’s enjoyable doing something different.

What do you think of Gary’s relationship with Sarah, do you enjoy working with Tina and the Platts, do you think it could be for the long haul?
Yeah I do, they’ve been together for a year and a half now and it’s been probably my most enjoyable time on the show. I think Tina’s a great actress and I love working with her and Lucy together, I’m blessed to work with two of the best actresses on the show so I can’t complain at all. If it was down to me I’d have them stay together for as long as possible.

Do you think the public like seeing Gary and Sarah together?
It seems they do yes, just picking up on what people have been saying they seem to be really popular so hopefully it’s not the end for them and Gary doesn’t risk his relationship over Nicola.