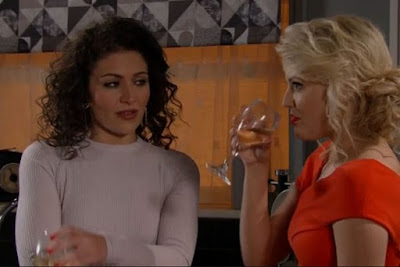 
How did you first feel when you heard that Mel was going to come back to the street?
I was obviously very happy but I knew that there would be some kind of intention behind it from Mel. But even though there is a reason why she is back, it is good that all of Mel’s story comes out and the Platts get to know everything about her.

What happens in that first moment Bethany sees that Mel’s back?
Mel has been homeless for a while so when she sees Bethany, she's desperate to speak to her. Bethany knows what Mel has done so obviously she doesn't like her and she wants to phone the police but Mel manages to persuade her to invite her into the Platts' to hear her side of the story.

What is Sarah’s reaction when Mel first comes back?
She probably wants to hit her and to go for her since she's put her daughter through all that. But Bethany persuades Sarah to at least let Mel talk.

Why does Bethany agree to talk to Mel after everything?
Bethany is trying to continuously open Mel’s eyes to how brainwashed she is. Bethany keeps asking her to come to court because she needs her help; Lara is not a reliable witness and Mel knows more so she can help to put Nathan away.

What’s Mel’s reaction to that?
Definitely deep down Mel knows that it’s right and that she should do it. There’s always the to-and-fro in her mind of whether she should go to court but that little voice in her head, which is Nathan, is just niggling away at her, saying, ‘No, do what I want, do what I want!’.

What is it about Mel’s backstory that makes us understand why she is the way she is?
At first Bethany doesn't know what Mel has been through and tells Mel not to play the victim so that’s when Mel says she’s had it worse. She says that she's taken beatings for Bethany and explains she was Nathan’s first with all this stuff and it just escalated. Mel still thinks that she's his one true love - she's been through a lot, a lot more than anyone realises.

How has it been playing such a complex character with the backstory looming over her?
At times it is challenging to get into that mindset but it’s been really good to play the different sides of Mel and have such a character arc in the story. You've seen a massive journey for her and I've really enjoyed playing that.

Have you found that viewers are understanding her a lot more?
Yeah, definitely. I have noticed that people are warming to her because they can see that there’s something with her. People can see that she's very manipulated.

Have you had anyone coming up to you in the streets?
The thing people always say is, ‘You really look like that girl in Coronation Street’, and I’m like, ‘Yeah, it’s me’, but everyone’s been really nice.

What’s it been like working with the Platts?
Ever since I started working with Lucy we have formed a really lovely friendship and she's just such a nice girl. We have bonded and that’s good when you're working so close with somebody, especially on a storyline like this when it does get quite dark because it’s nice to be able to have those uplifting moments in-between. Working with the Platts like Tina, Helen and Sue has been so much fun on set. Sometimes I just stand there and watch because I am still new to it and it’s interesting to see how everyone does the different things and how their characters get to where they get to.