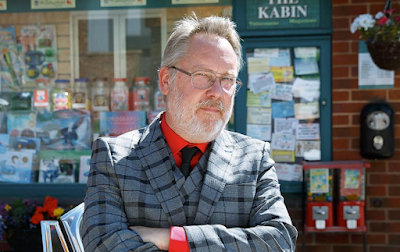 
Now then, I'm a big fan of comedian Vic Reeves... A Big Fan.  I'm also a big fan of Jim Moir (Vic Reeves' real name) in his acting roles. As Eric Morecambe's father George in the show written by Victoria Wood he was sublime. Read more on that here.

But in Coronation Street? I'm not sure he's worked... not for me anyway. And it's disappointing - but not totally expected. You may well disagree with me and I'd love to hear your views. I just think that Vic/Jim has a persona bigger than Coronation Street itself and he'll always be Vic Reeves to me, making the investment of him as Colin of Corrie a little difficult.

Don't get me wrong, there have been comedy moments from Colin - the high leg, anyone? 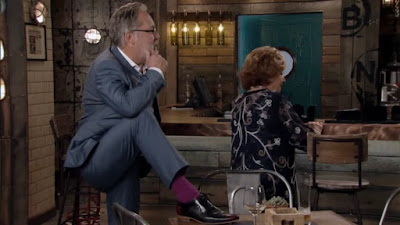 And I don't think we were supposed to particularly like his character anyway, were we? I mean, going after Dame Rita of Tanner as she lay in her hospital bed, determined to get the contract signed so that her flat went to him.

And as for taking over the Kabin... well, he wasn't meant to endear himself to fans, that's for sure.

And so... I really would love to know if this is just me having a moan and whether you loved Vic/Jim in Corrie.  But for me, I'm afraid, it's been a great big fat Nay.

A huge nay for me! I find him to be an insensitive jerk! Can't understand why in the world the character was introduced. Will be glad to see the back of him.