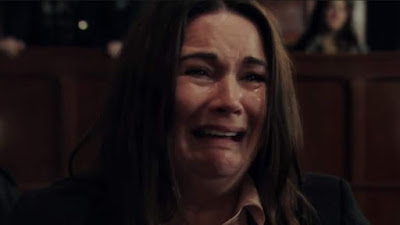 (This post was originally posted by David (Clinkers) on the Coronation Street Blog in January 2018, reposted to this blog with permission.)

Well here we are, the end of January already and most of us wondering what the Christmas storyline will be in Weatherfield this year. OK maybe not but the world of Corrie hurtles along at a breathtaking pace these days. It all seems to be going relatively well at the moment. Thankfully, screeching Anna has been deposited in Cell Block Weatherfield for fifty years and will probably be working the steam press in the prison laundry as we speak. Or, hopefully, someone has jammed her head in the thing.

For me, there is some unsavoury stuff coming up.  I'm not particularly enamoured with the idea of grotesque fumblings between Carla and Daniel. Carla's new role in Corrie seems vague, other than being ill and waving her cheque book at everyone who approaches. She's strong competition for Rita in that department. Also, Daniel is something of an unlikely lothario. He always seems to be on the point of collapse and could do with a week under a sun lamp.

The Phelan storyline rolls on and in the hands of a lesser actor this would have become nightmarish. However, Connor McIntyre delivers again and again. Add to this the bumbling stupidity of Mrs Daft (Eileen) and it really is a slice of joy. I'm not sure what I'm looking forward to most - the fall of Phelan or the demolition of the House of Grimshaw. Bring it on.

Elsewhere though, it's still 1987. I speak of the wonderful Classic Corrie episodes airing on ITV3. These are a wondrous indulgence, particularly during grim old January. Every day there's a chance to whoop for joy as Bet saunters into the Rovers bar looking like a transvestite flamenco dancer. Her wigs should have their own fan page. Particularly fascinating was the one which appeared to have been ironed flat on top.

People shout a lot on Classic Corrie. There was lovely episode where Ivy 'babby' Tilsley confronted Gail (sporting four different hairstyles at the same time) on the doorstep of her Soviet-chic council house. Then cut to Alf bellowing away at Ken, Audrey screaming at Ivy, Vera honking away at everything. Bleeding ears for all. 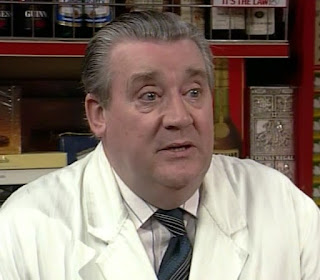 Life in 1987 Weatherfield is deliciously wrong. We are meant to believe that Terry Duckworth, only in his twenties and at that stage, not bad looking, can only get his jollies from having a fumble with some old woman in a nightie. It's a world where heavily pregnant Gail wanders into the pub for a port while Audrey perches across from her billowing cigarette smoke from her nostrils. It's world where Ivy, on a lunch break from t'faktry, pops over to number five and helps herself to a family sized meat pie. Later we see her guzzling a plate of chips. The woman must have been 75% lard and 25% venom.

It would be silly to claim that everything about Corrie Gold is wonderful. Every set seems to be so brightly lit that that actors are squinting at each other. The shadows of boom mikes pass freely across Deirdre's specs. We can hear cameras squeaking across the studio floor. What is a bit of a surprise, particularly as we are now so used to slick performances, are the number of fumbled lines that make the final cut. There are glorious moments of forgotten names, lost words, actors looking at the camera, some waiting for a cue. Sometimes there are interminably long scenes such as a dreary one between a hyper-ventilating Mavis and awful Derek where the only hope was that Alan Bradley would charge into the shop flat and smother the pair with one of Rita's wigs. Let's not even get started on la Fairclough's knitwear but presumably she bulk-bought the stuff from Bury market. 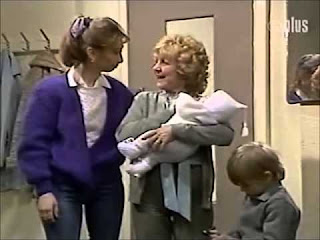 The real difference between the two Corrie worlds though is the humour. 1987 can be laugh out loud whereas the best 2018 can offer is an uncomfortable titter as Brian pratfalls in the presence of a bipolar woman. There is a place for both Corries at the moment and they compliment each other perfectly. Maybe 2018 needs to take a few notes from 1987. We need to see Toyah traipsing around the bar like Dana International. Dev needs to up the wattage in the corner shop and shout at everyone who comes in. Gail and Audrey need to bellow at Ivy's grave. And maybe, just maybe, if we're lucky, Rita still has a bag full of blue wooly jumpers in her attic.

By Clinkers to Riddle
@bridglondon

Was some of it live TV in those days , hence the fumbled lines?

There were some dreary scenes in the olden days. I remember them even as a child. They would never fly by today's standards and expectations. However life was a little dreary in the UK in those days.
I like the more modern Corrie . What really bothers me is the lack of continuity and the unresolved story lines.