Corrie Exec Producer Kieran Roberts given send-off on the Street 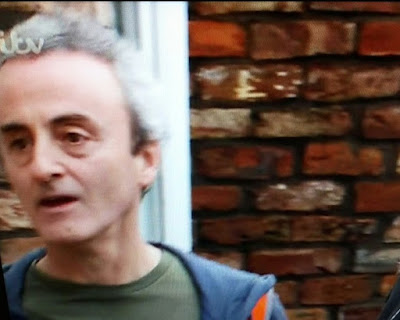 With apologies for the lack of quality in the picture above, as I took it with my phone during Coronation Street last night.

Did you spot Kieran Roberts, Corrie's Executive Producer, in the show last night? It was a real 'blink and you'll miss it' moment but a very special one at that.

Pat Phelan acknowledged Kieran, posing as an extra on the set, when Kieran walked past him on the Street. 'Hope you have a good holiday, Kieran,' Pat told him to which the Exec Producer replied 'Thanks, Pat.'

It was a lovely thing to do, I felt, because back in October last year it was announced that Kieran Roberts would be stepping down as Executive Producer of Coronation Street after 16 years at the helm.  You can read more on that here.

As yet, his successor has not been announced.

Good luck to you, Mr. Roberts, in whatever you do next.  And have a good holiday, too.