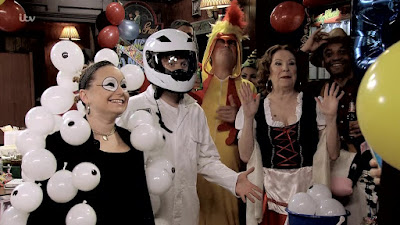 Costume win: Loved Gemma's balloons, Brian appropriately dressed as a chicken (or rooster in which case, you can make your own mind up), Liz as Queen Elizabeth I was great. There were a few other really good costumes on the extras, too!

Denial isn't a River in Egypt: Gemma must realize Henry's reactions to her are lukewarm at best so I can only deduce that she just doesn't want to see the truth.

Musical Ambiance: "Fever" in the pub when Eva's agonizing over the pregnancy and Adam with Shona. 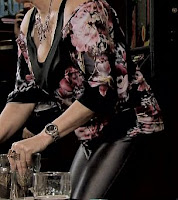 Fashion fail: Liz hasn't been castigated for her fashion choices for awhile but what the heck was she wearing? Shiny leggings and a duo layer filmy tunic?

Rod Serling award: Peter is confronted by all of his women, all laughing together. He probably thinks he's in the Twilight Zone. Or maybe he's just seen the Four Horsemen of the Apocalypse?

Feminist award: Toyah's University fancy dress costume of a fish riding a bicycle refers, of course, to the old saying "A woman needs a man like fish needs a bicycle"

Soap cliche award: There's always an obligatory outburst in the courtroom, either during testimony or at the verdict. Faye, this time, screaming her mother's innocence while Anna shrieks her agreement. She's not Deirdre but it was typical Anna. 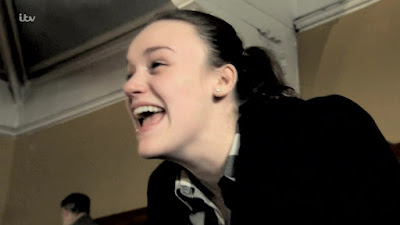 Lines of the week:
Lawyer "Sing a little tune in your head" Anna "What would you suggest? 'I Want To Break Free'?" (good one!)
Toyah "With Carla back on the scene, I need to get used to being surrounded by Peter's exes"
Michelle to Peter "Oh calm down, it's not the Witches of Eastwick" (no, it's the Four Horsemen of the Apocalypse!)
Peter "Sarah. Get a mop"
Tim "I never did live down those leiderhosen" (brain bleach, please)
Peter "It's been a long time since I've been up at 3 a.m. with a (baby) bottle in me hand" (I don't think you ever were. Lucy took Simon away from Peter almost at birth)
Toyah about her fancy dress costume "I went as a fish riding a bicycle" Gemma...stunned..."Did you take a lot of drugs in uni, then?"
Cathy re Fancy Dress "Should you go slutty-stylish or full on ridiculous?"
Amy "This is so unfair. You buy her a trip to Paris and you don't even care if I get abducted!"
Eva "Toyah I can't have the baby you wanted!" (ouch)