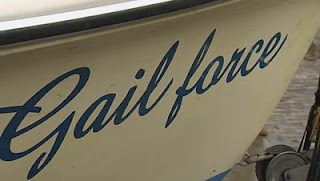 Off we go for another week of Sunday comments. Don't forget to check the Bluenose Corrie Blog tomorrow for Lines of the week and weekly awards!


After last week, this week seems like it's taking a deep breath and getting it's footing back.


Gail's trying to adjust to life on the outside. Now she's got nothing to think about but Joe's death and it's not going to be easy with the boat that killed him parked outside the door. And looking for all her stuff after Natasha has rearranged the kitchen. Tina is clinging desperately to the last shreds of belief that Gail killed Joe but you could see her defences crumbling, little by little. Her having her job back is a good thing and Tina's back to work too. She and Tina finally made things up.


Nick's busy gobbing off at Deirdre and Peter, cheering that Tracy has been beaten up. I can understand his feeling but he's not got a tactful bone in his body. Now he's poking sticks at Peter and dragging Leanne into things.


Roy makes a romantic meal for Hayley and fills the flat with smoke. Meanwhile, what's on the stereo? "Mama, I just killed a man...." Nice. Hayley, stay in the cafe. But then, Roy goes down on bended knee on broken glass to ask her to marry him. He's not thinking pensions, now, not now he nearly lost her. But now, Hayley seems to have accumulated Mary as her new best friend and wedding planner. This can't end up well.

Audrey isn't too chuffed to realize that Lewis probably had an overnight date. He says "it's my job", oh really? I wonder how many other widows he's got on the string? And if he sometimes stays over, he's obviously being paid for it. An escort is one thing but a middle aged prostitute is another. Audrey, run for the hills! Also, he's been a bit flirty with Deirdre, too, wasn't he? He probably can't help himself. So he's said he's quitting. I don't trust him, i just don't. It's too bad, though, because they make a nice couple even if he's a little younger.

Now, what do we think about Izzy's dad, Owen? Clearly, he and Liz seem interested in each other. He also made a nice peace offering for Izzy. Mind you, it seemed to be about spending money, chocolate, perfume and music and all that. But Gary talked her around. I like the two of them together. I think Izzy is trying a bit too hard to be independent and Owen is finding it hard to let go. They need to find a happy medium. 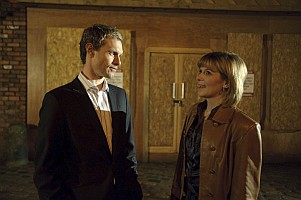 Looks like Nick is still breaking dates with Natasha for work. He's taking the bull by the horns and he's got a new contract. And nowhere to make the knickers. Talk about cheeky! And he tried to hide the fact from his new buyer. So he sucks up to Peter and Leanne to try to get their old bar premises. That means getting in touch with George which Peter will never do so it's the old sob story for the good old times he lays on Leanne to get the number. Surely the owner would be registered with the local council? Couldn't he just do that? No of course not, because Leanne wouldn't be involved. He's so rude, too, isn't he? I think we need to form a slap line to the right, k? Nick thinks Mike Baldwin was right, you don't have to like the boss. Well he's on the right road to that, then. Mind you, i don't know who was worse in the pub, Peter or Nick and both of them clashing horns like rams on a mountaintop! 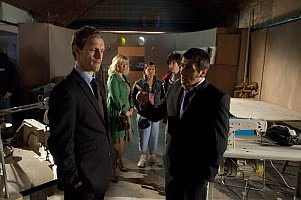 Meanwhile, Natasha found out he was married to Leanne and isn't too happy about it. And Nick is having way too much enjoyment out of winding up Peter about Leanne going behind his back. Methinks he still carries a torch for his ex-wife and maybe Peter thinks so too or he wouldn't have kicked off so much. So now everyone is working in a dimly lit space. If Nick could rent sewing machines, why can't he rent a few brighter lights? That can't be safe practice. And if there's supposed to be a tram rattling across the viaduct overhead (like we see in the opening credits), how come we never hear it in the new factory? Surely it's loud enough that the machines don't cover it? Anyway, Natasha is still chasing Nick and now she's lent him the money he needs for the factory. Naturally he's going to take it but that gives her even more reason to think he wants a committment to her. 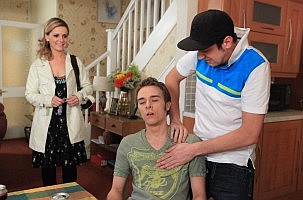 Laughed at Natasha teasing David and Graeme when G. was massaging David's shoulder! Chesney was always so smart, why is he finding school so hard now? Julie drooling over Ciaran was a laugh, too, though she was a bit daft swooning over the accent when there were all those lovely tattoos on display ;) Ciaran wants to do a speed dating night. That should be good for a laugh. I bet Mary would autobahn over the whole lot of single men, or at least be a train wreck to get to Norris. Tina seemed a bit put off that Graeme wanted to do the speed dating.


Mary is absolutely bonkers, isn't she? Dressing up with a Princess Leia hair do and going on about Star Wars to Ciaran. She was kind of possessive of the Kabin too, wasn't she? The end of one story had something to do with a magistrate. I love that we only get odd little cryptic remarks like that out of her, referring to some murky episode in her past.

Looks like Trev is going to get to see the World Cup after all. He's taking Carla to get away from it all now the police have quite rightly let her off the hook and given her passport back. Chesney has had enough of school and is selling dog collars on the market! He makes out like it was all so hard but he used to be very smart and Cilla and Les considered sending him to Oakhill.
Posted by Tvor at 12:35